Hello everyone it has been quite some time since I last posted. However, I've continued to be a busy Bee. After traveling from Ghana to Kenya and Tanzania, I had to prepare for a visit with my family in Ghana and then returning to the US.

Since then though, we've been building a website for our business side of life. You can follow us at amxpression.org there you will find up-to-date information about our goings on. Please give us a moment to build the site to be efficient for our use.

Our team, Alahyo Young, Samuel Bentum, and I are diligently working on many other projects keeping A Matter of Xpression (AMX) in the loop for future ventures. We did great work in Kenya and Tanzania and I have to wait to share all things with you. We visited and donated to so many schools, met so many children, shared with so many educators...

I must get to my other responsibilities though - teaching full-time, being a grad student full-time, managing the business, attending Union functions, events, and rallies. Oh, and I can't forget campaigning -- this year in Pennsylvania we are in a fight to keep collective bargaining a part of our work governance rules. It's crazy in Philly, and we need everyone to GET OUT THE VOTE on November 4th!!!!

No excuses, VOTE!!!!, because Philly, York, Pittsburgh and other urban public school systems in our State teachers/students are looking more like those of third-world countries -- underserved and unrepresented.


Posted by Bonnee Breese Bentum at 7:06 PM No comments:

Posted by Bonnee Breese Bentum at 9:44 AM No comments:

We did it!!! Sound quality was questionable, and we in Ghana experienced the "dum sor" - an electric company enforced power outage which cut out APGSS for a brief moment.  However, we connected for over an hour with only the beginning portion recorded. Next session will be all that, just hold on...

Special thanks to Mr. Afful, ICT teacher at APGSS and Mr. Bentum, mathematics teacher for their computer technology contributions. We could not have accomplished the task without them.

It is well with my soul.

Experiencing a PTA meeting here at APGSS is so different from any of my experiences at any US school, even my daughter's schools in the 'burbs were not like this. First, the room is packed - after several hours into the meeting because Ghanaian people do not live as if they are chained to a clock. Although the meeting began promptly at 9AM, parents continued to file in until about noon and no one looked at them sideways as they filed in front of a speaker or the head table. The meeting is run by the PTA Chairman. The Headmistress is given the opportunity to speak and answer any question that might pertain directly to her administration and the school's agenda. 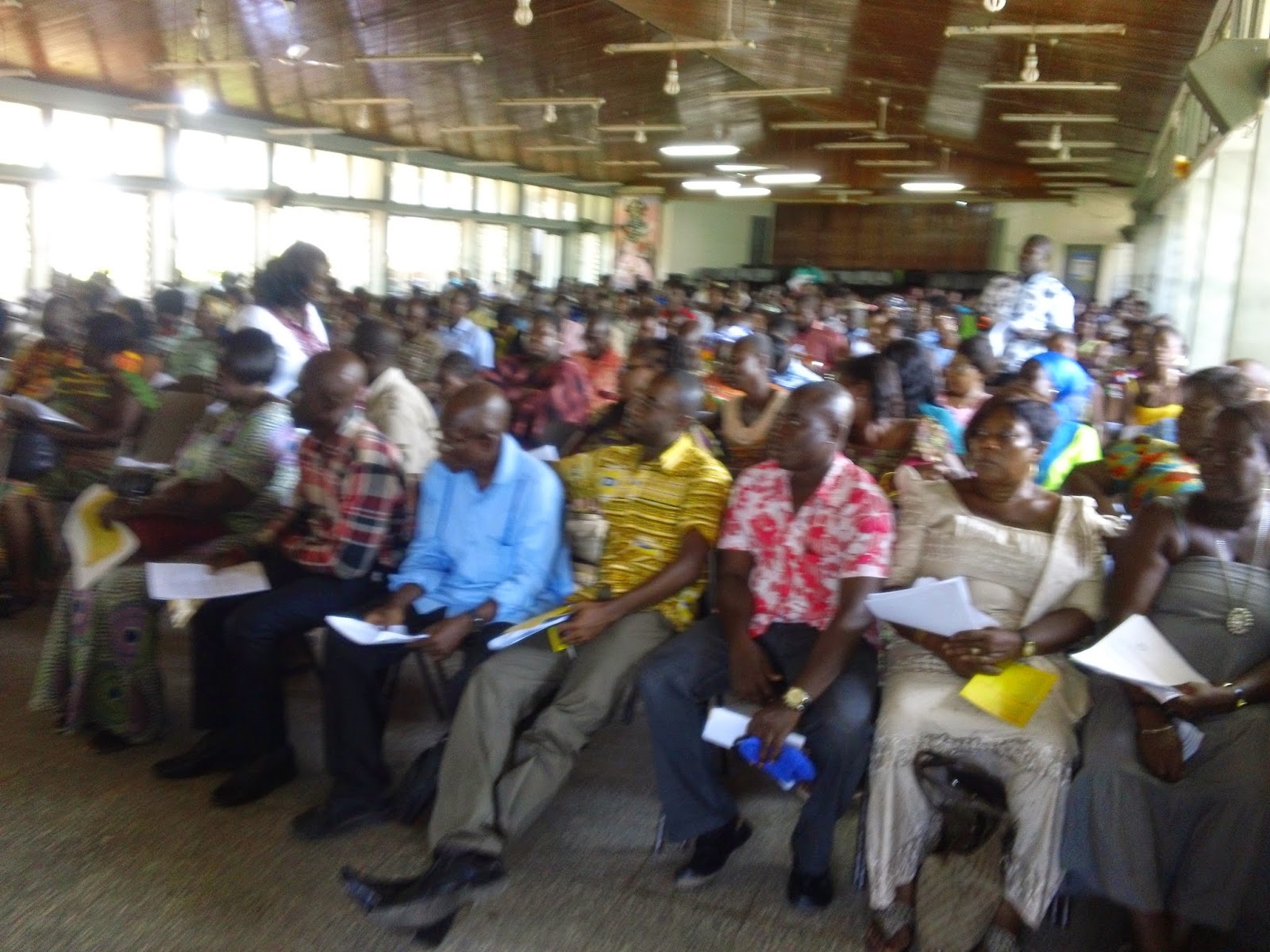 Funny thing though, much of the meeting was focused on money, their accounts. Yes, the PTA has funding from various strands at the school, and even more, they use different banks to hold their funds. Agendas with financial reports attached were distributed to attendees as we entered the assembly hall, allowing everyone to follow line-by-line items. Remarks were made about each item by the auditor (an outside hired source). Interestingly, he did not know exact figures (which were in the packet we received) because of the change of hands - PTA admin and Headmistress. Maybe this only happens in Ghana, but folks at Overbrook HS would be enraged if no one knew exact figures nor had proof of any funds at the time of the meeting. No one in the audience seemed to be angry or frustrated about that, there was no challenge from the floor. 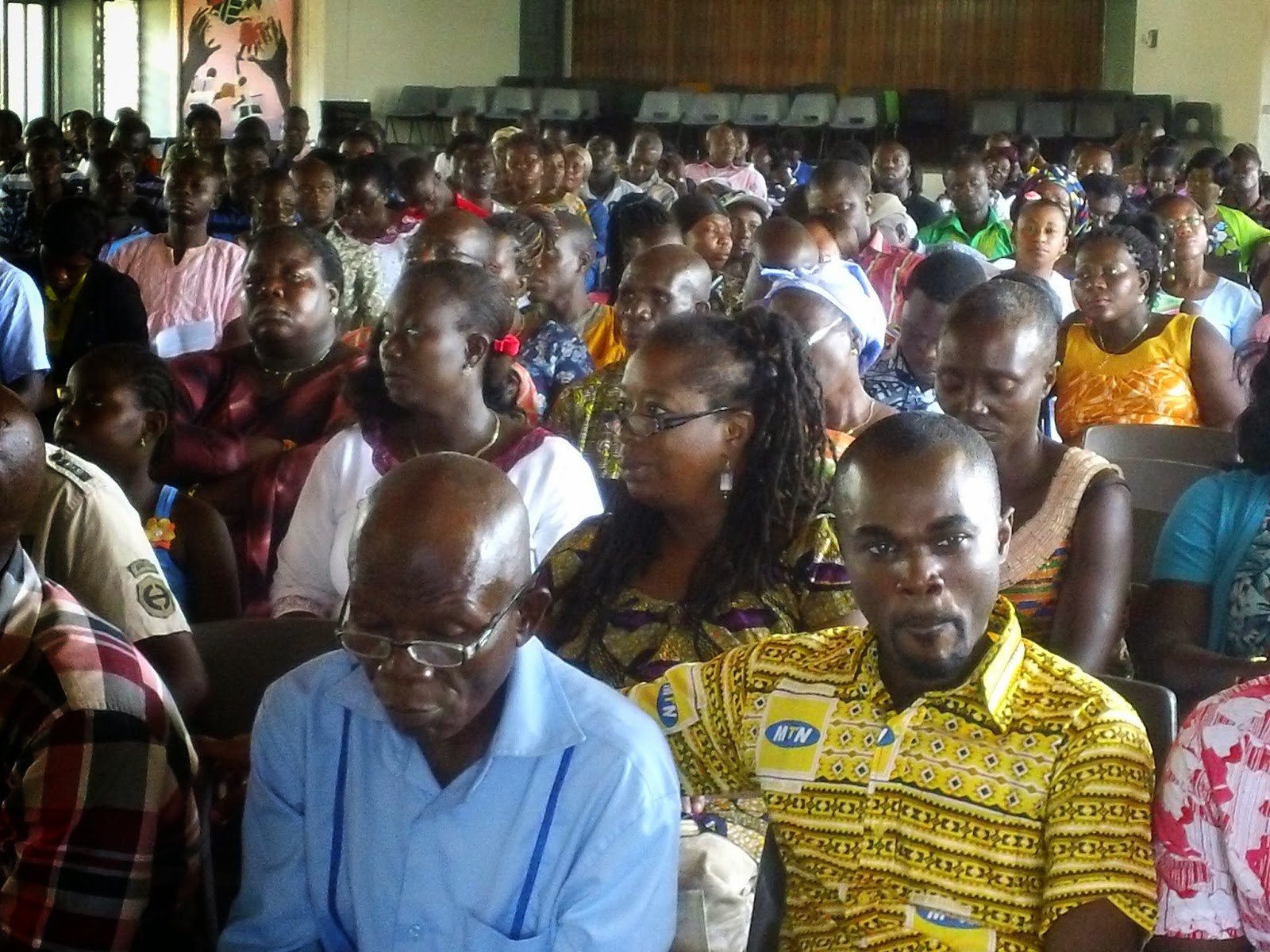 I must mention, everyone spoke English throughout the meeting until the very end, so I understood what as happening. Also, my ear for Ghanaian English is becoming fine tuned... I understand most of what us being said. Even when those around me speak a little Fante blended with English (Fante-English), I can dance through a basic understanding of the conversations. Moreover, after the financial reports were completed, the Chairman asked for all the parents to give an additional 20GHC to purchase a 4-wheel drive vehicle for Headmistress Aggrey (retired) as a gift from the parents at her Send-Off Party, to be held this coming weekend. The Chairman went on to say, she had done a fine job at the school and lost lots of sleep dealing with their children and should be duly rewarded for her efforts of 4 years. Now, I almost fell out of my seat. Not a peep came from the floor against the motion - and baskets were passed around the room by students who served us refreshments and provided other hostess services for attendees.

Can I get a Headmistress position please? I put my 20GHC (equivalent to @ $8.50 presently) in the basket though, she was good to me and still is good to me! 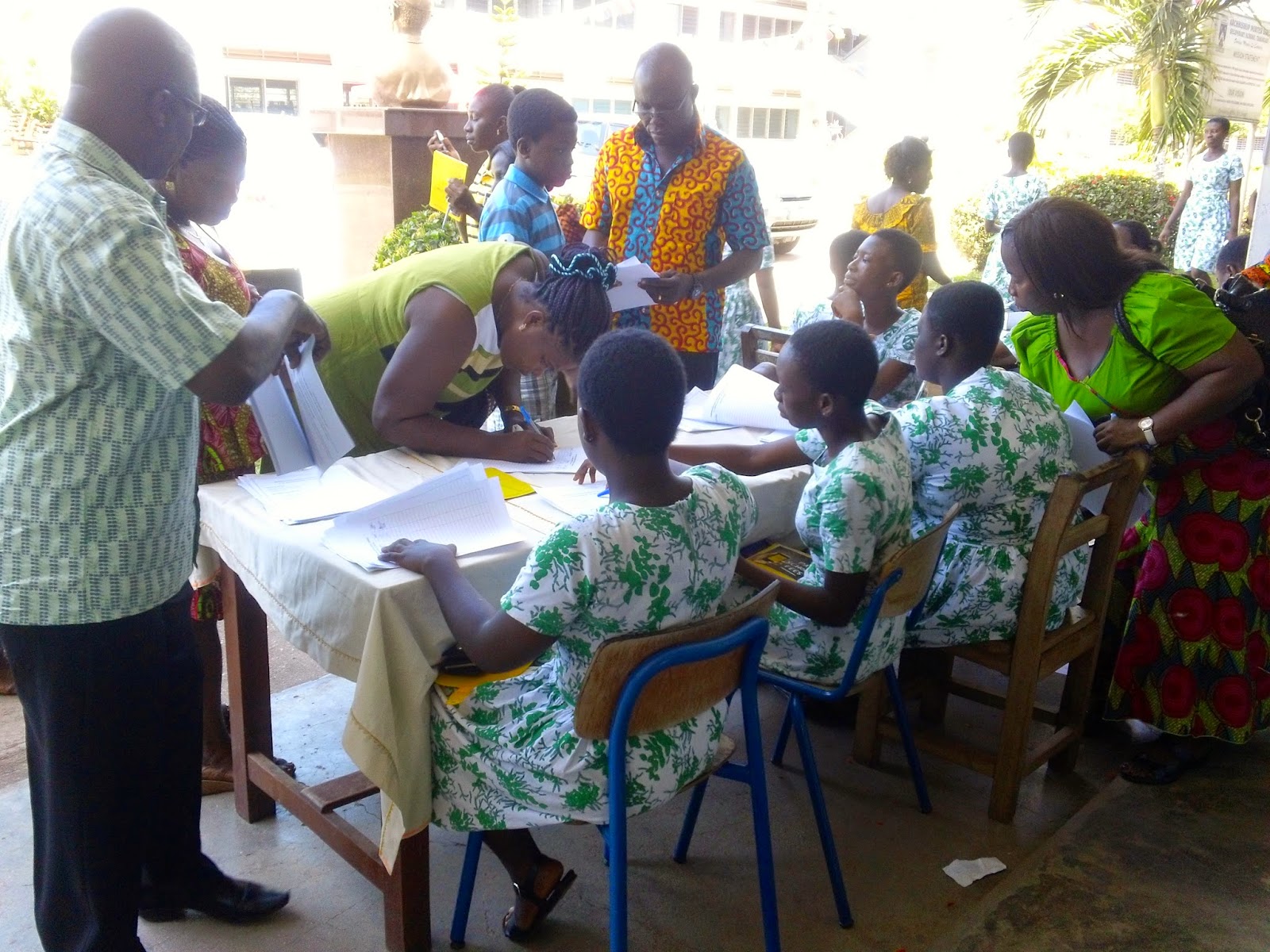 Next, the Chairman explained he had a wedding to attend and that Headmistress Armah-Brako had to attend a funeral, both having to leave earlier than what is normal for the meeting time span. No argument from the floor again and no questions asked about it. Except -- a parent complained he had not received the mailing notice about the meeting. This was a crazy request from my viewpoint, mail is not delivered to homes, you must have a P.O. Box to get anything like our US mail. Oh, and most Ghanaian adult folks don't have email either. Sooooo, the phone number game is the same - changed numbers, cut-off lines, lost phones, everyone is using mobile phones here - confusion. I have 2 mobile lines myself; one for regular use, the other for US calls (better minute plan and bonus); when the other network is down. Oh, let me give those companies shout-outs MTN is my main line and TIGO is my US rock - having the best ever bonus plan I've found. Parents were told by Headmistress, the school will attempt to try an email relay, parents would have to return the greeting area to give updated information for this and to pay any outstanding fees they might have for their "ward." 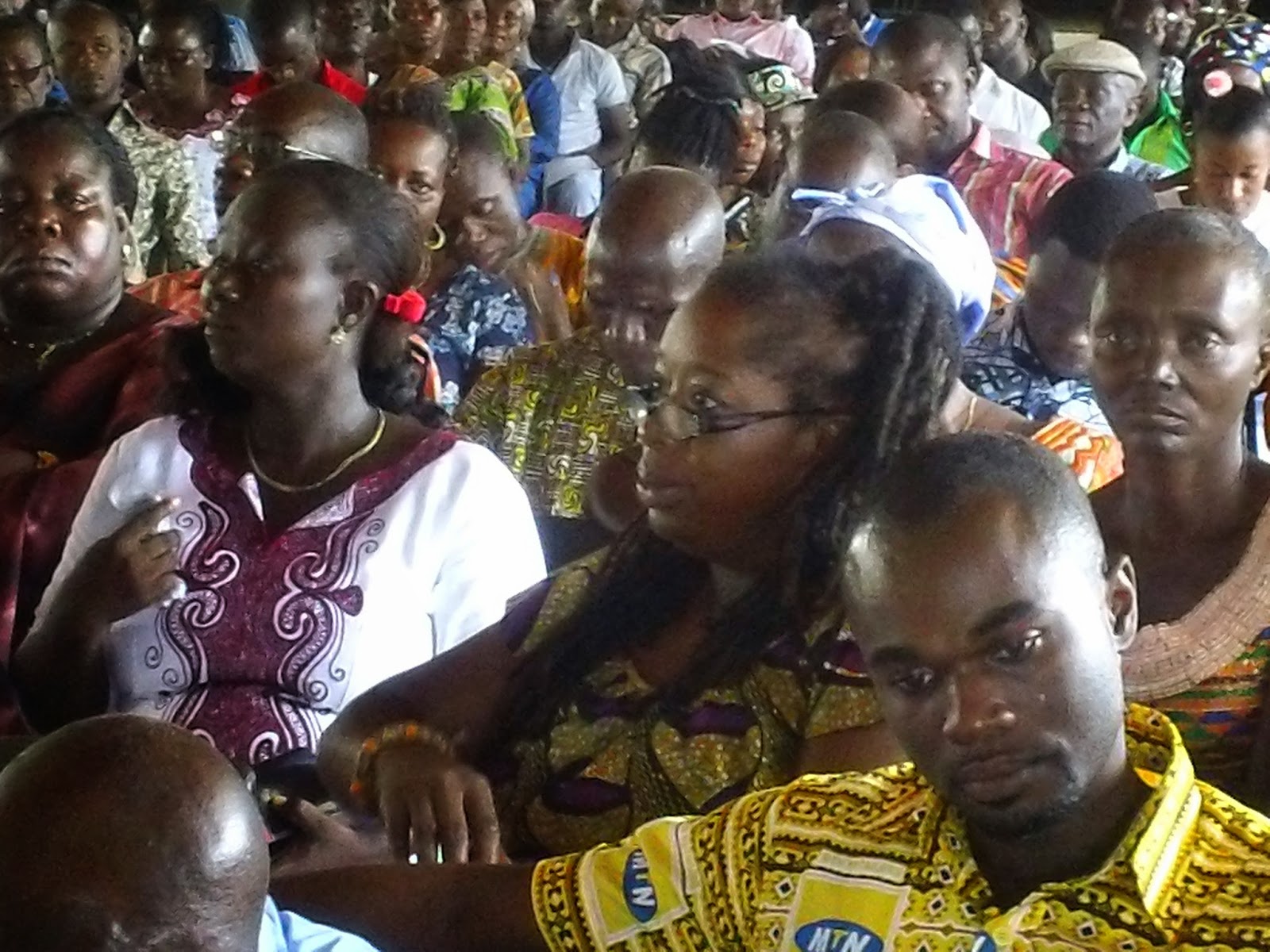 Thereafter, an MTN representative came to introduce a new mobile money transfer that will allow them to pay school fees at APGSS - it's a new service being offered by the Ghana mobile phone service giant, at the low cost of 2GHC for each payment transfer. I took my calculator out for that one. Dannnnggggg, there are 1600 girls at APGSS and there are about 19 other schools using the service now -- imagine how much money one can make on that charge. The other option presented was for them to continue to use the 5GHC transfer service or come to the school to pay. Y'all the latter option is almost out of the question when roads are not that good and some parents are traveling for hours to get to the campus. One parent (smart lady) asked the MTN Rep, so what will the school get for their participation in the program -- he smiled and politely sat back down. That was all the time he was given. Headmistress responded by saying she would look into that further (smart lady).

There was a motion and a second to adjourn the meeting. Chairman ran out the door, Headmistress and her team remained seated. Each Assistant Headmistress presented issues in the areas of their charge and sat back down. Then, parents began complaining about their unhappiness that the meeting was ending; many having just arrived. Headmistress agreed to stay and answer any questions or note any of their concerns. It got out of hand, parents were typical parents. This part of the meeting was when mostly Fante was spoken. I wondered what any Ga, Ewe, or others felt when this switch in spoken language occurred. Anyway- thankfully, a distinguished gentleman rose and was permitted to speak. He scolded his fellow parents for not having the guts to challenge the Chairman when permission was given to end early, but now with the female leader at the helm -- it's a problem. I was dumbfounded, too. Thank God for that man, who defended the honor of Headmistress. 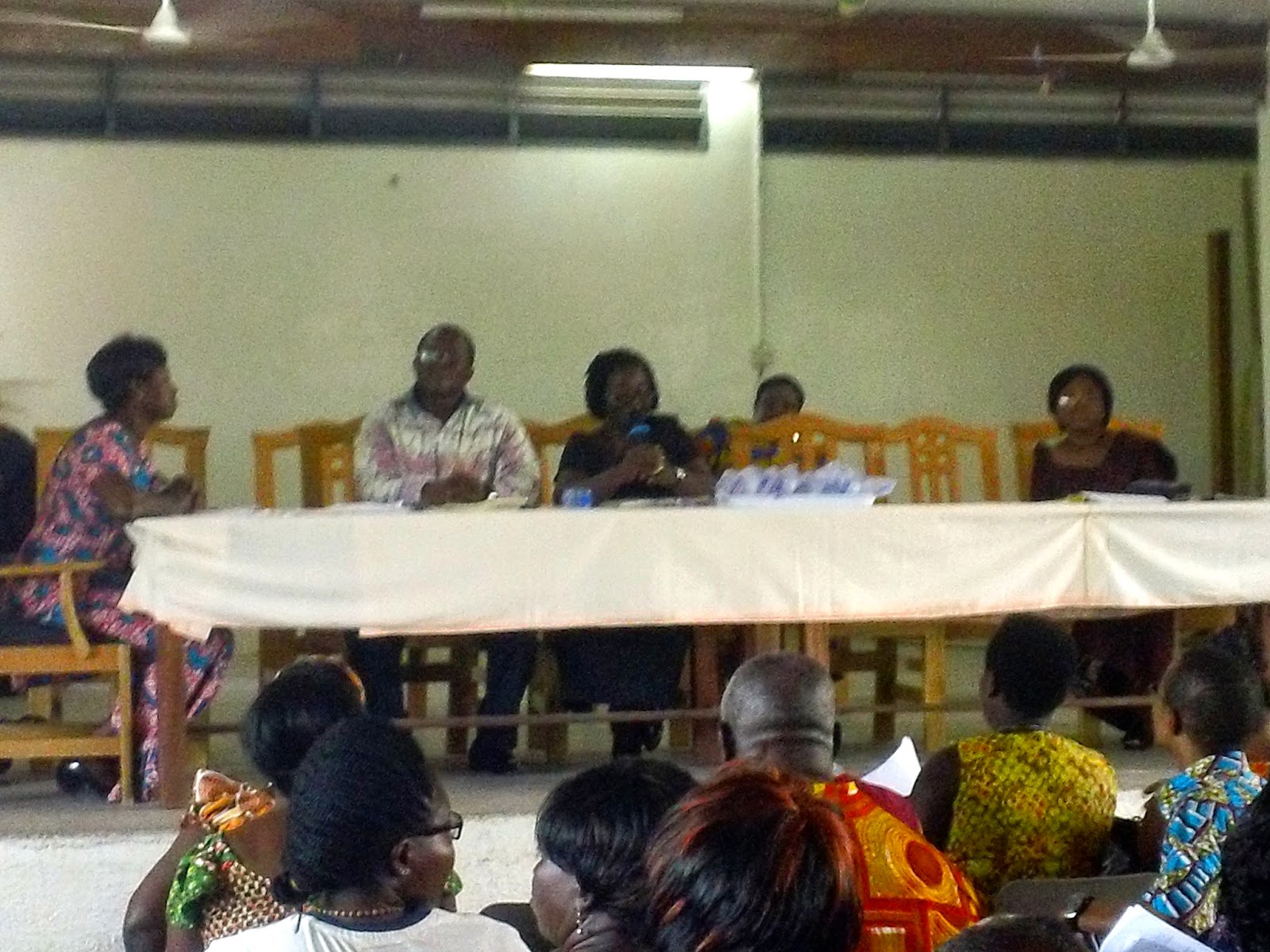 She permitted parents the opportunity to I believe two or more questions/comments and then she shut it down. Oh, I almost forgot. I must give props to my Mr. Christian Djokotoe (TGC Host Teacher) for handling the sound system, Mr. Bentum & Mr. Mixon circulating the room with the microphone for parents to be heard and more importantly - Mrs. Roxanne Kwaitoo (English Dept. Chair) who took the minutes of the meeting! The meeting closed with a prayer given by one of the parents and visiting began with the children thereafter. Parents are permitted in specifically assigned areas, most having so much food you would have thought their children had not eaten for days.

Lastly, the refreshments were APGSS purified water, a Coca-Cola or Sprite can soda, a sandwich (my first here in Ghana and it was good), or a meat pie. Props go out to Asst. Headmistress Theodora for having the hostesses get all the bottled water off the head table having them bring APGSS sachet water in its place. Only right when the parents pay for the refreshments served at their meetings, plus parents drink the purified drinking water sachets (and the purification system itself was paid for by the PTA).

This system works, it has its bumps, but it works. I enjoyed the time with all.
Posted by Bonnee Breese Bentum at 4:46 PM No comments: 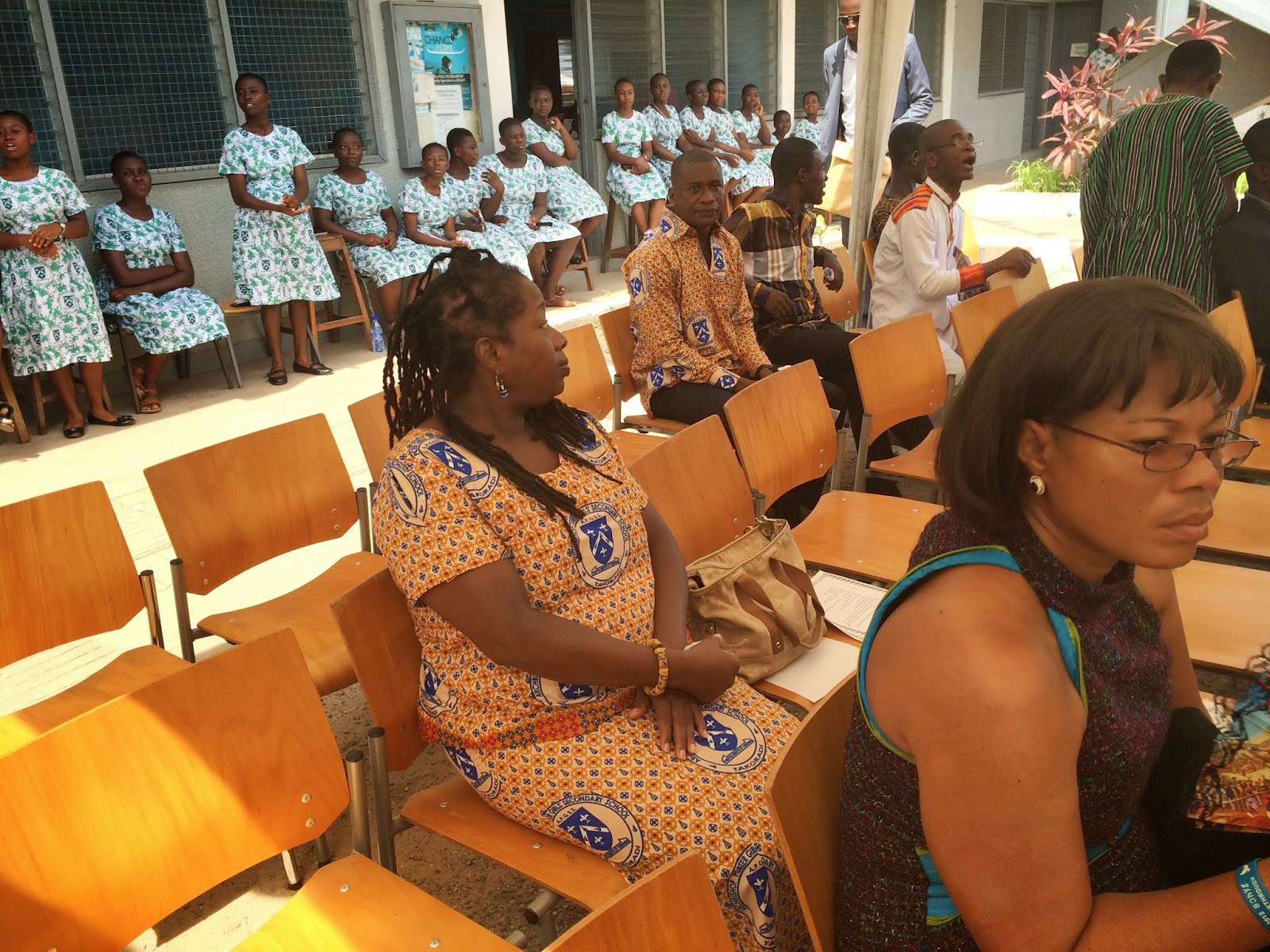 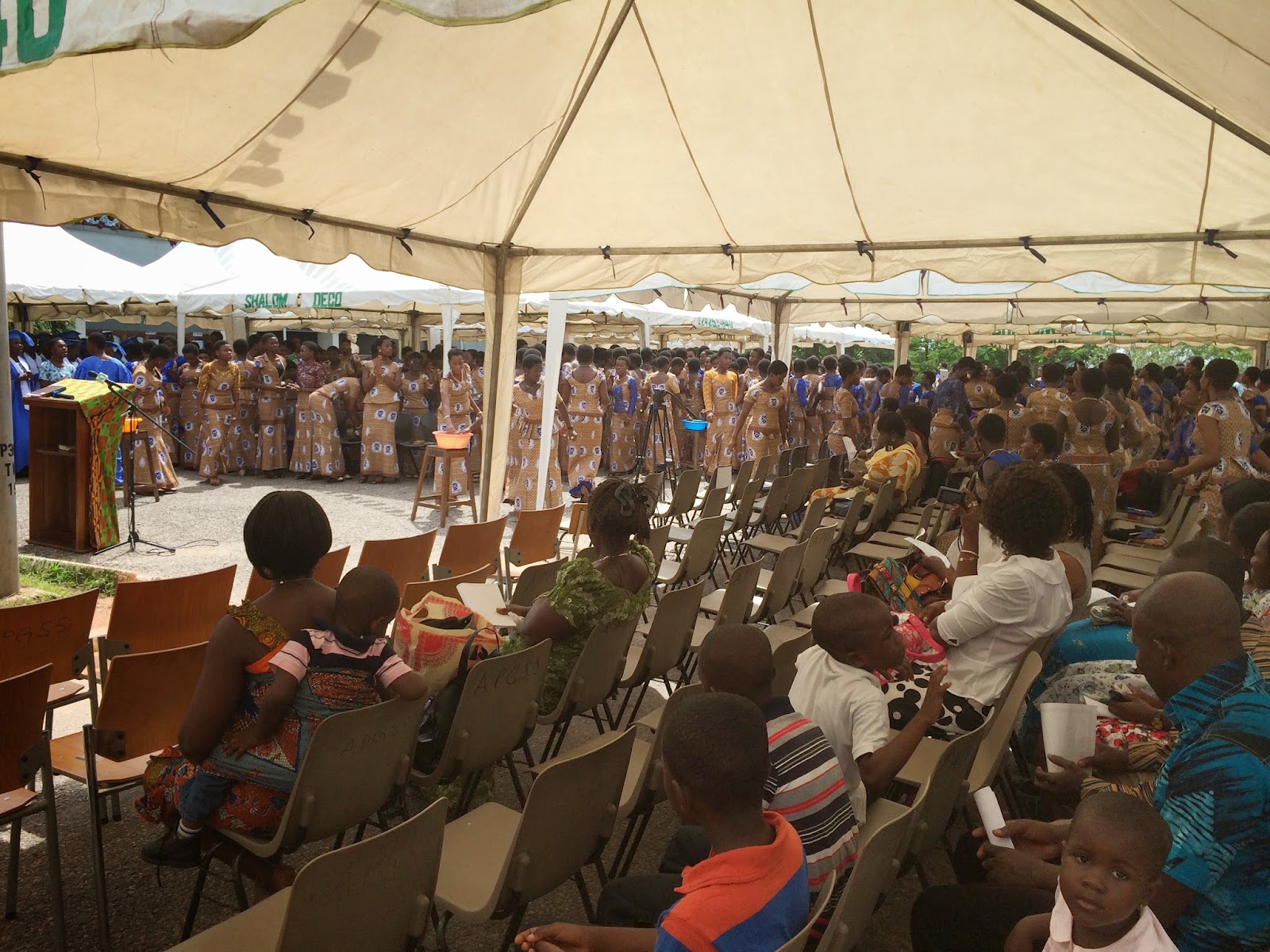 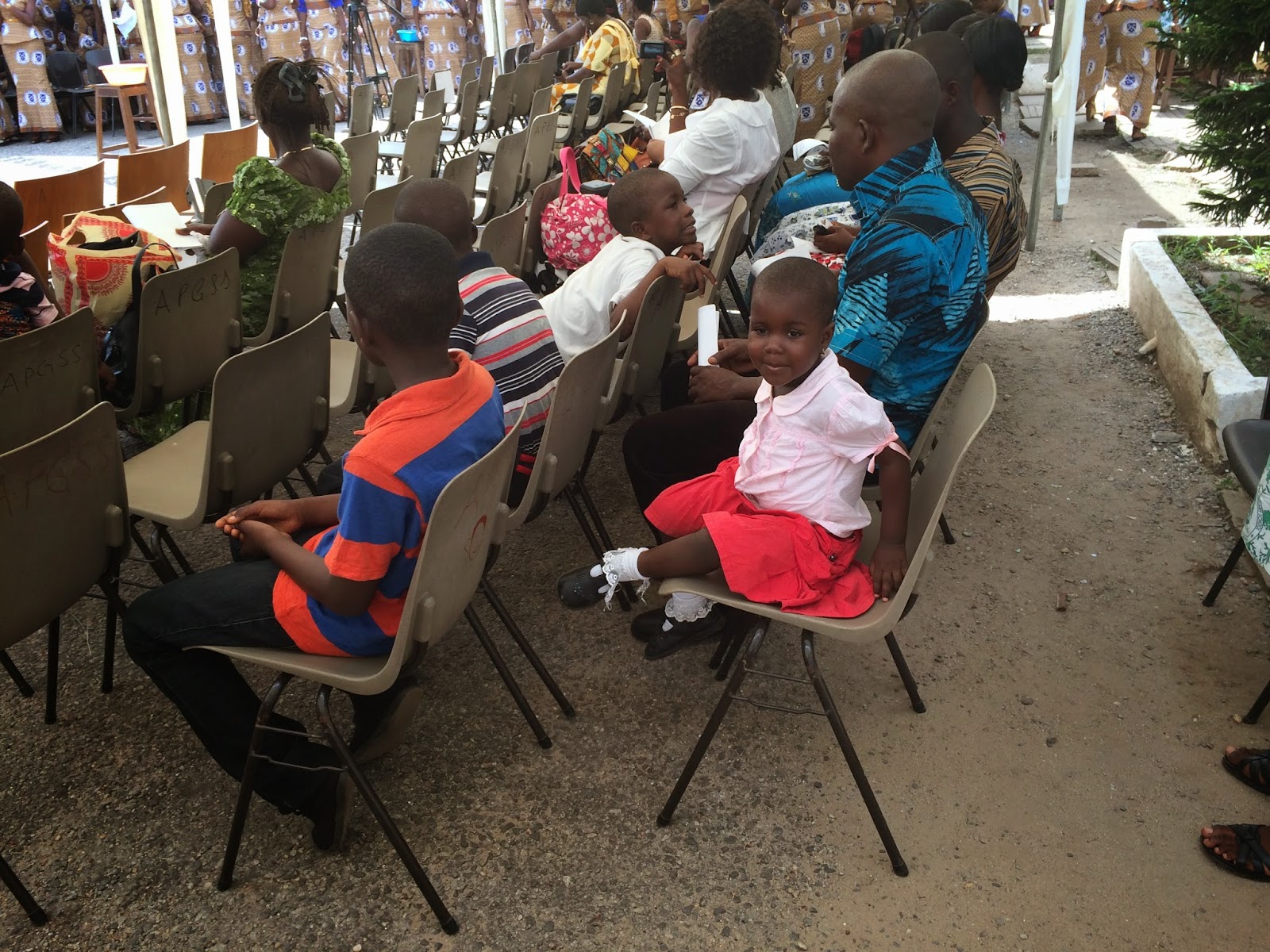 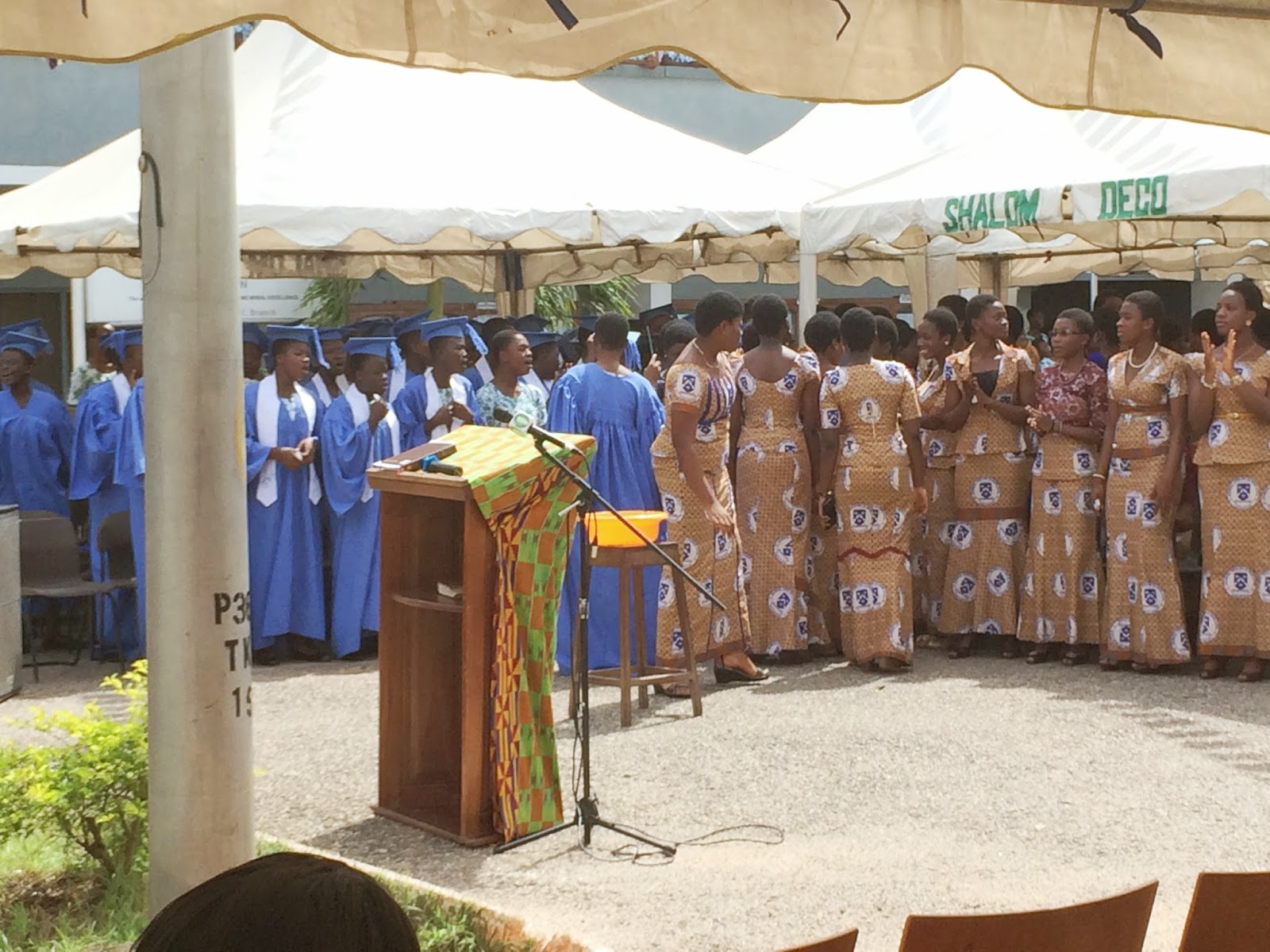 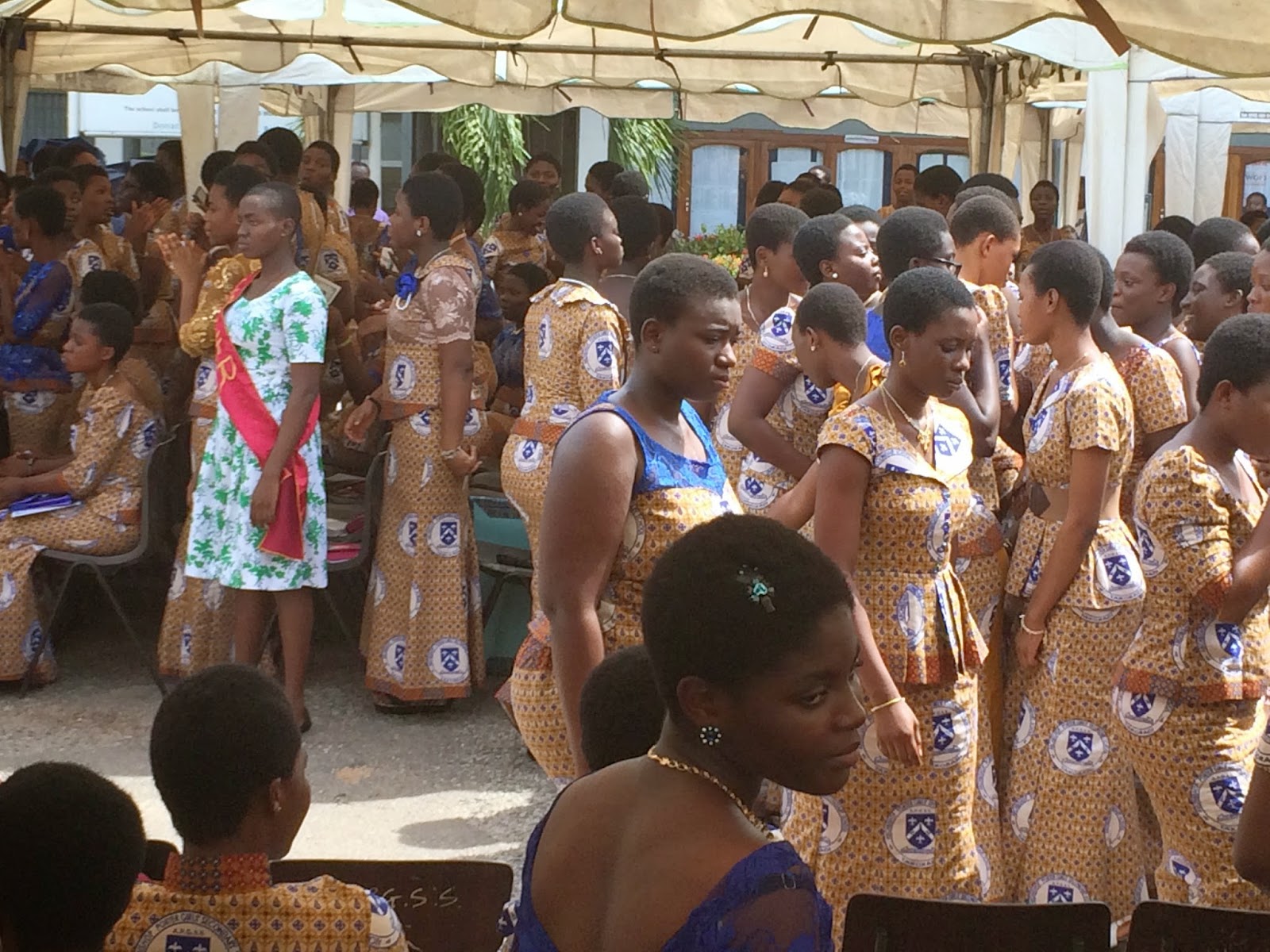 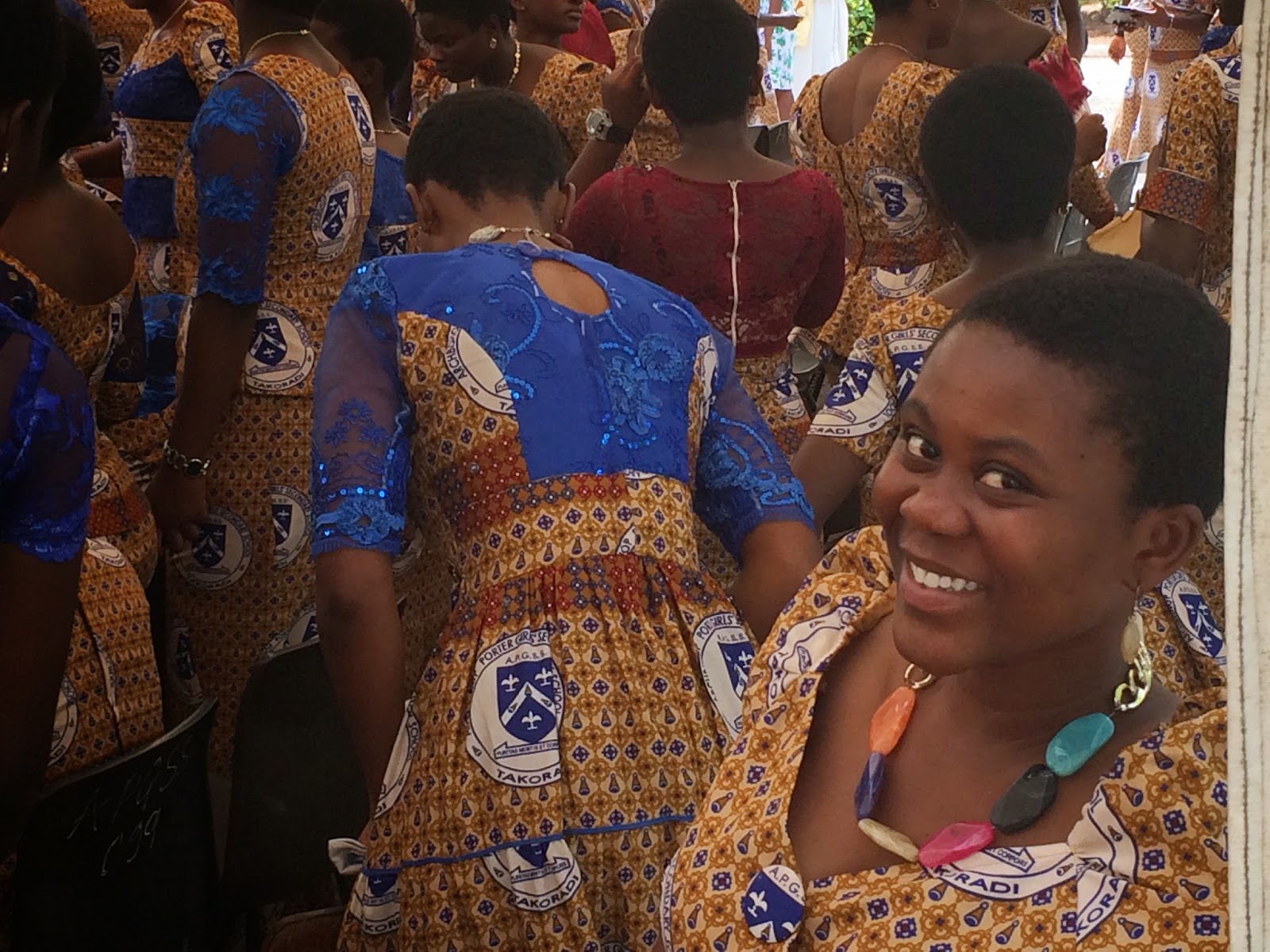 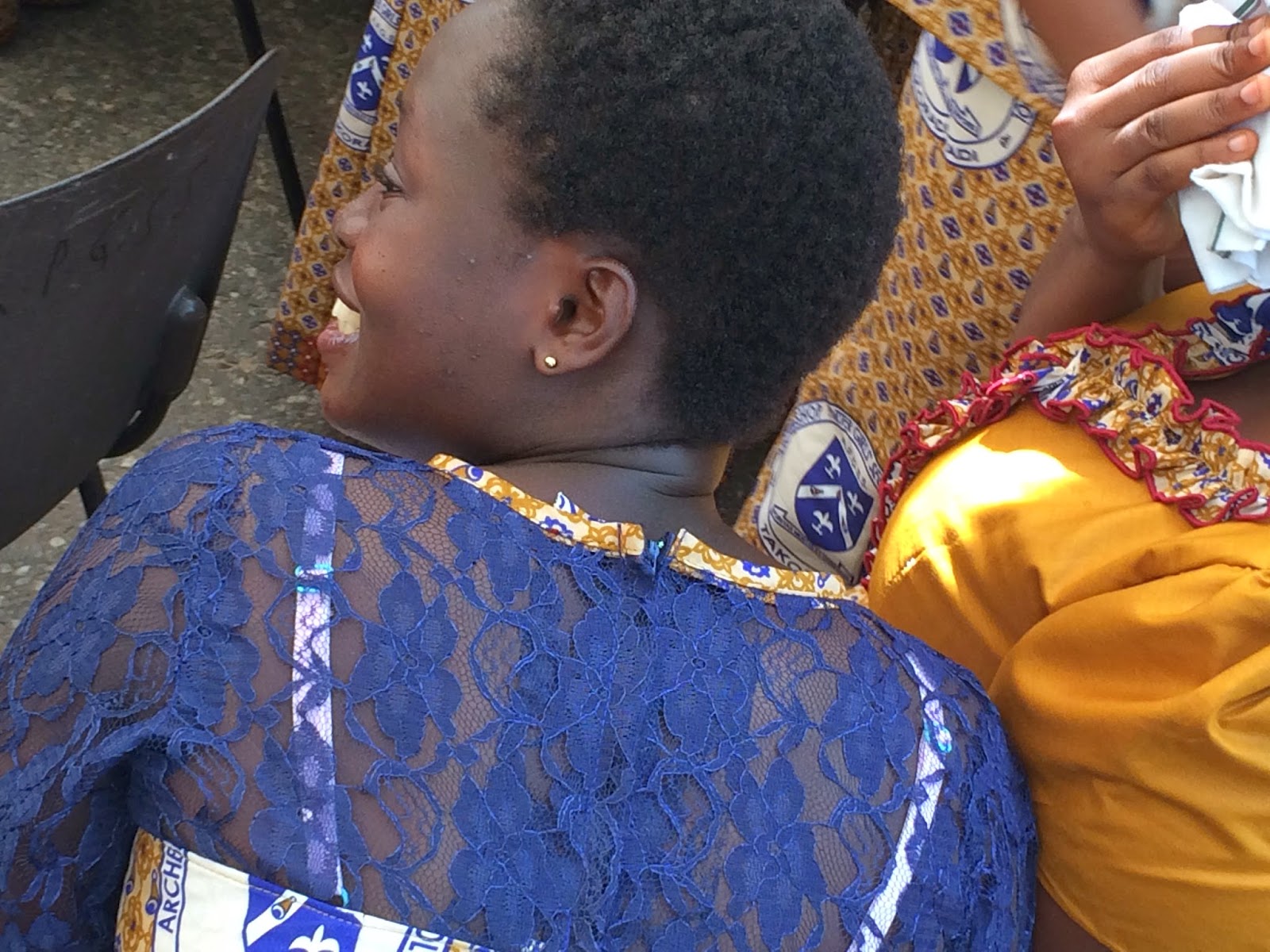 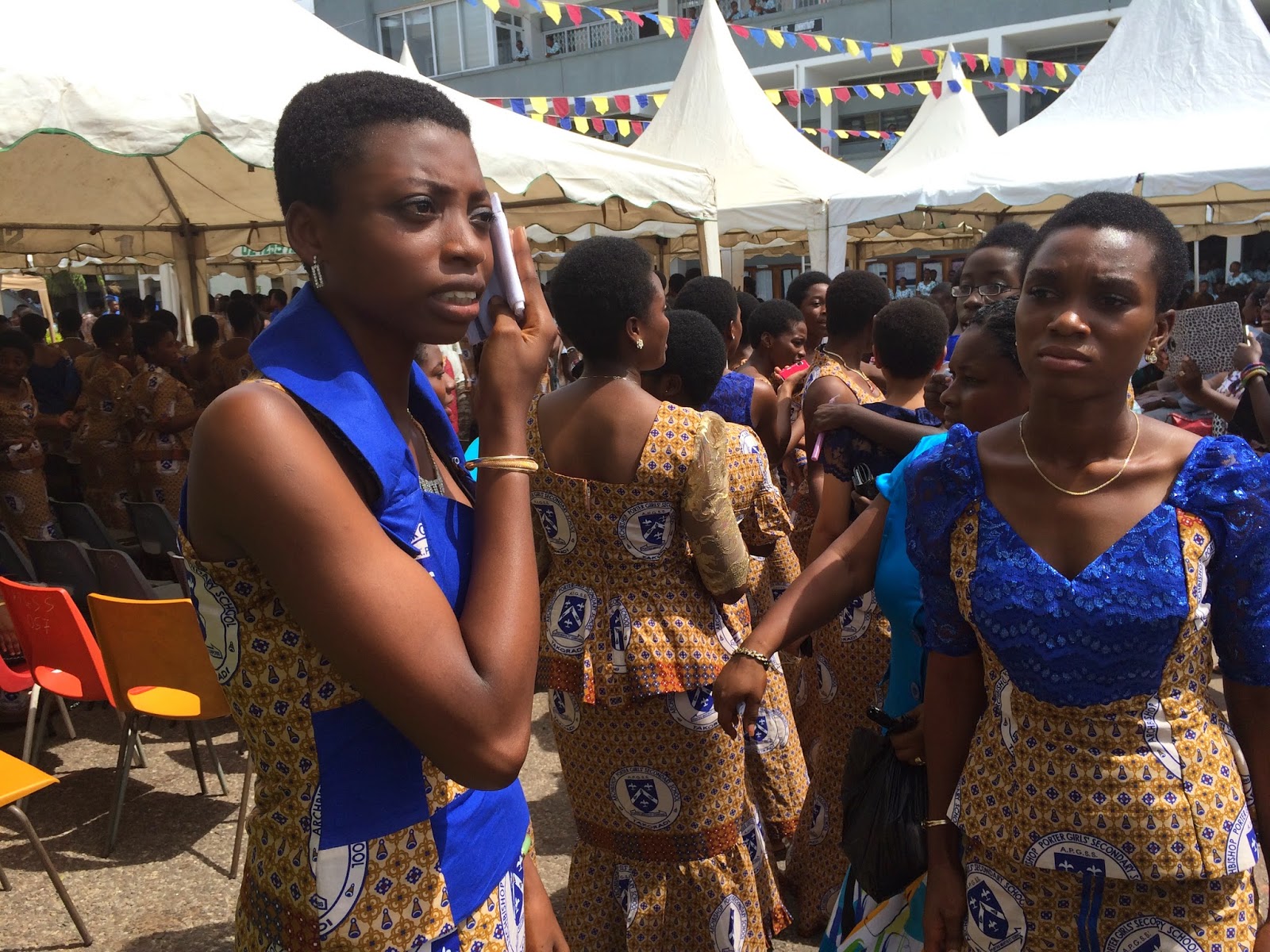 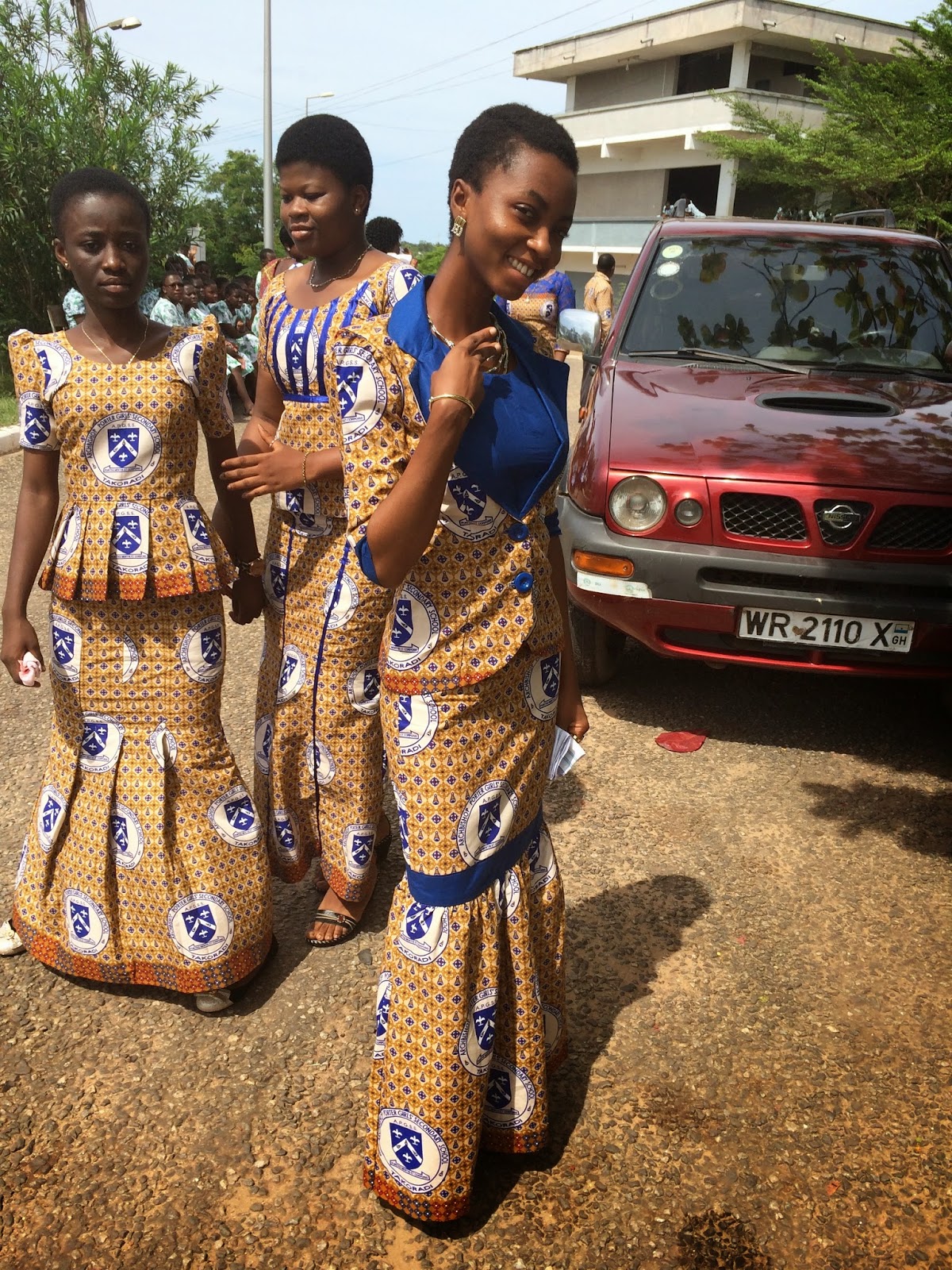 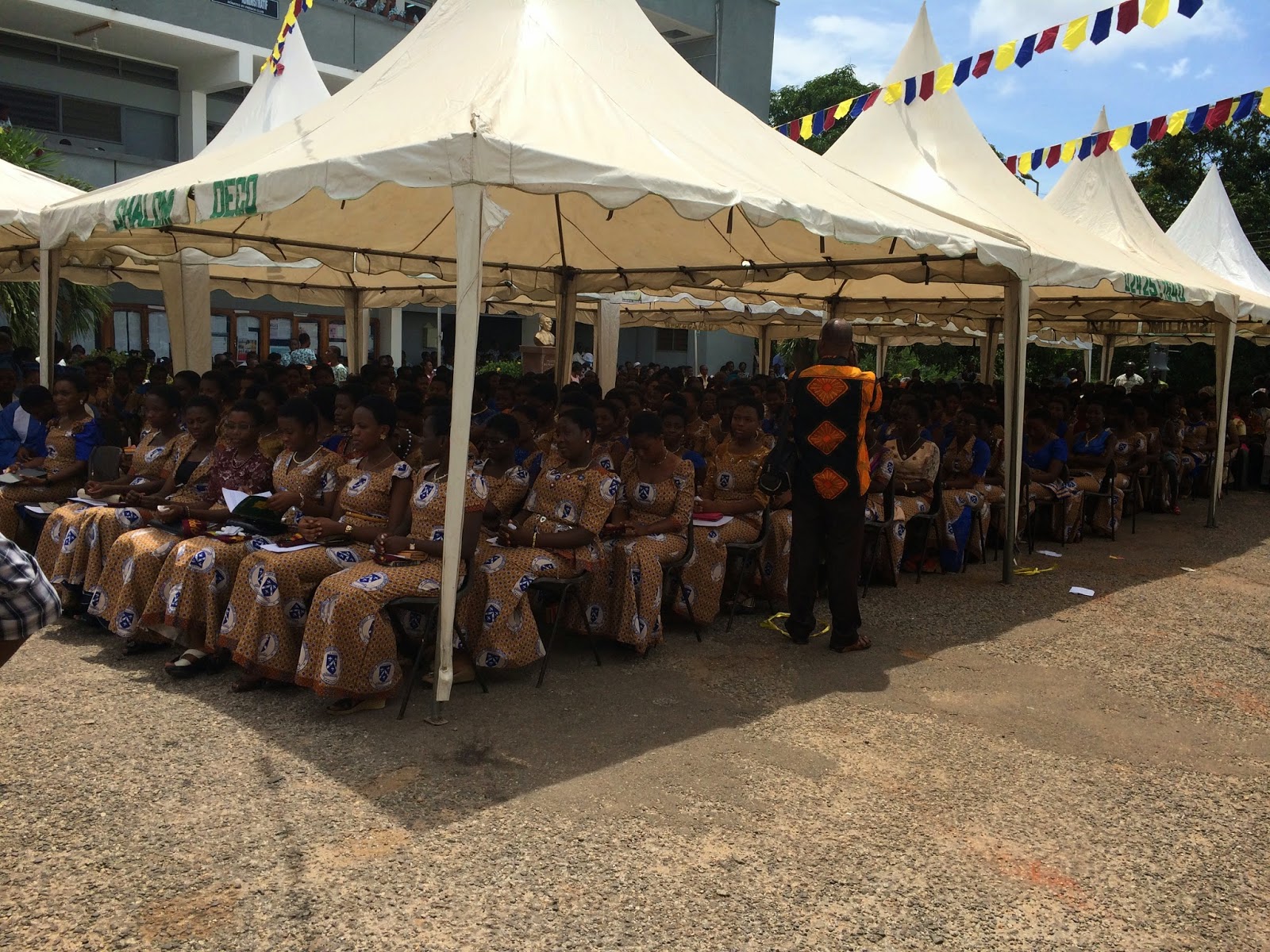 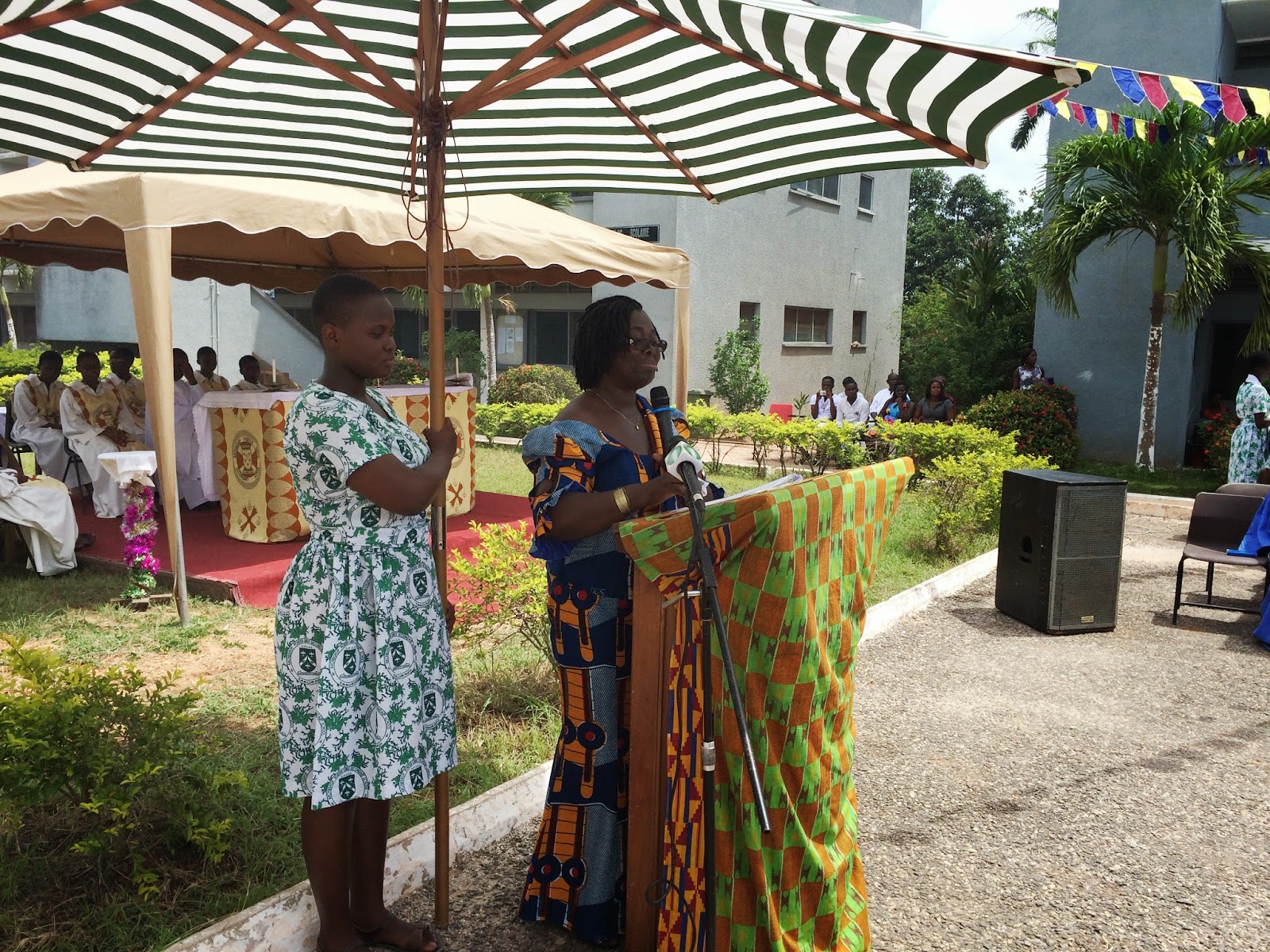 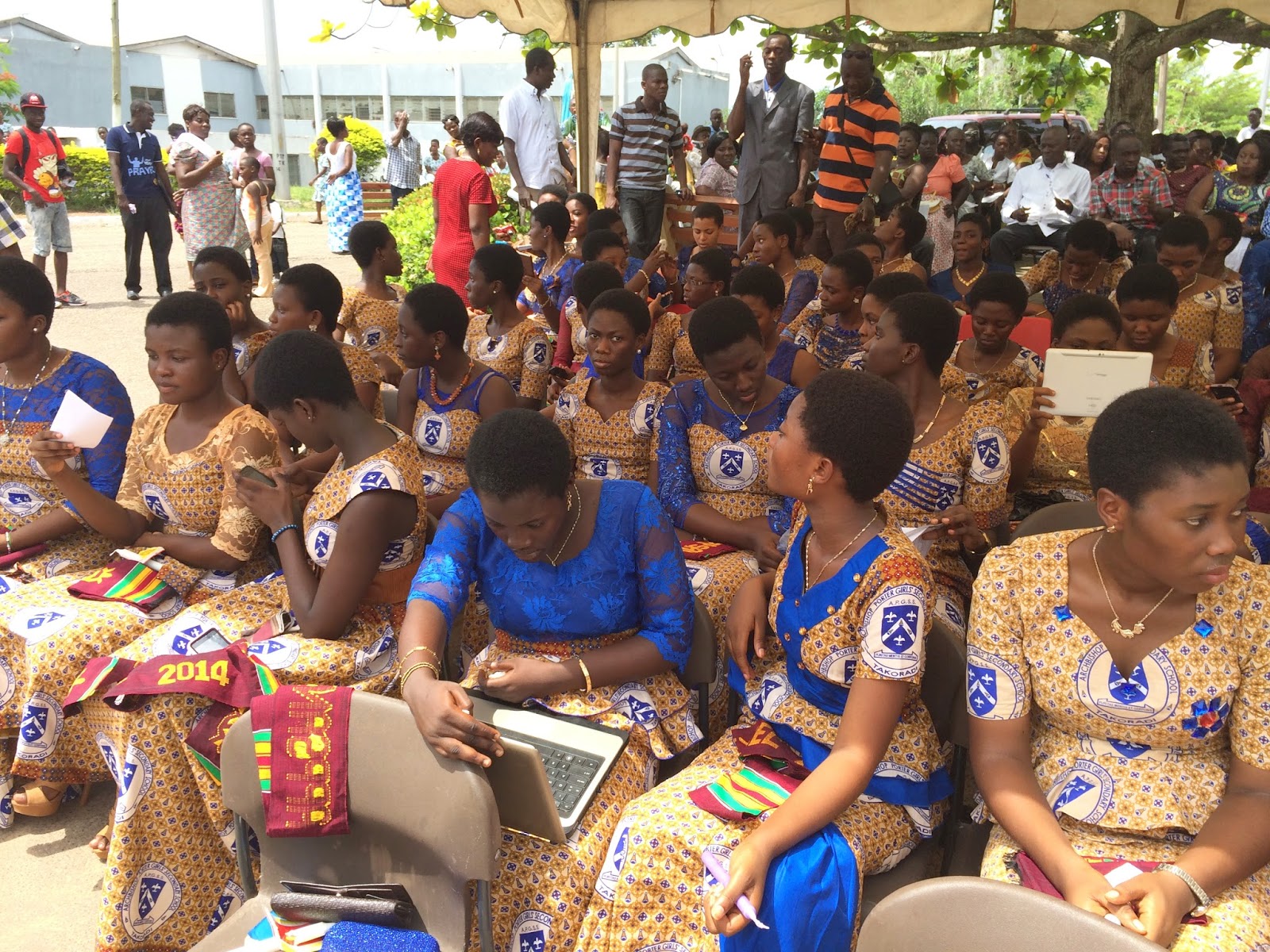 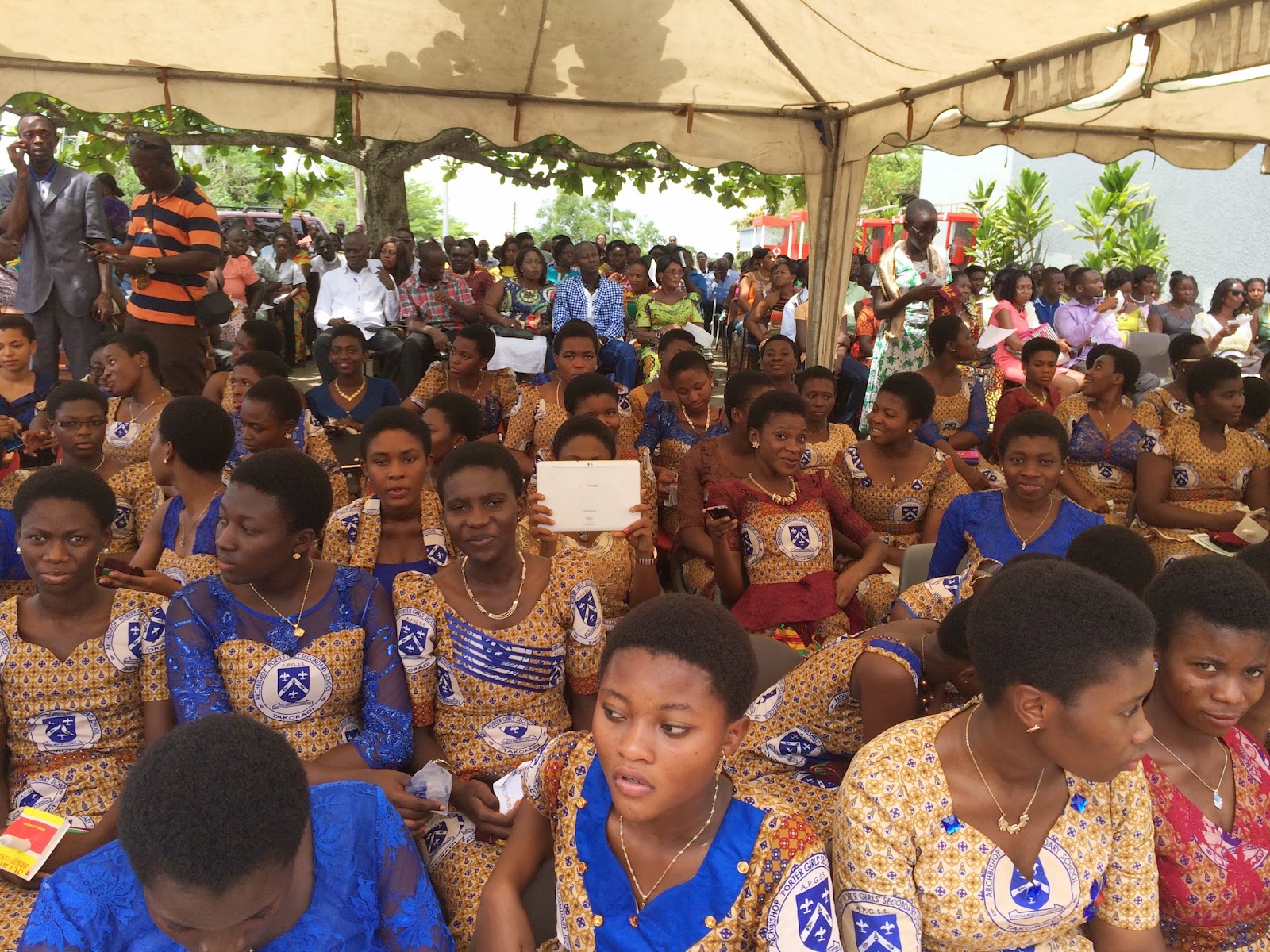 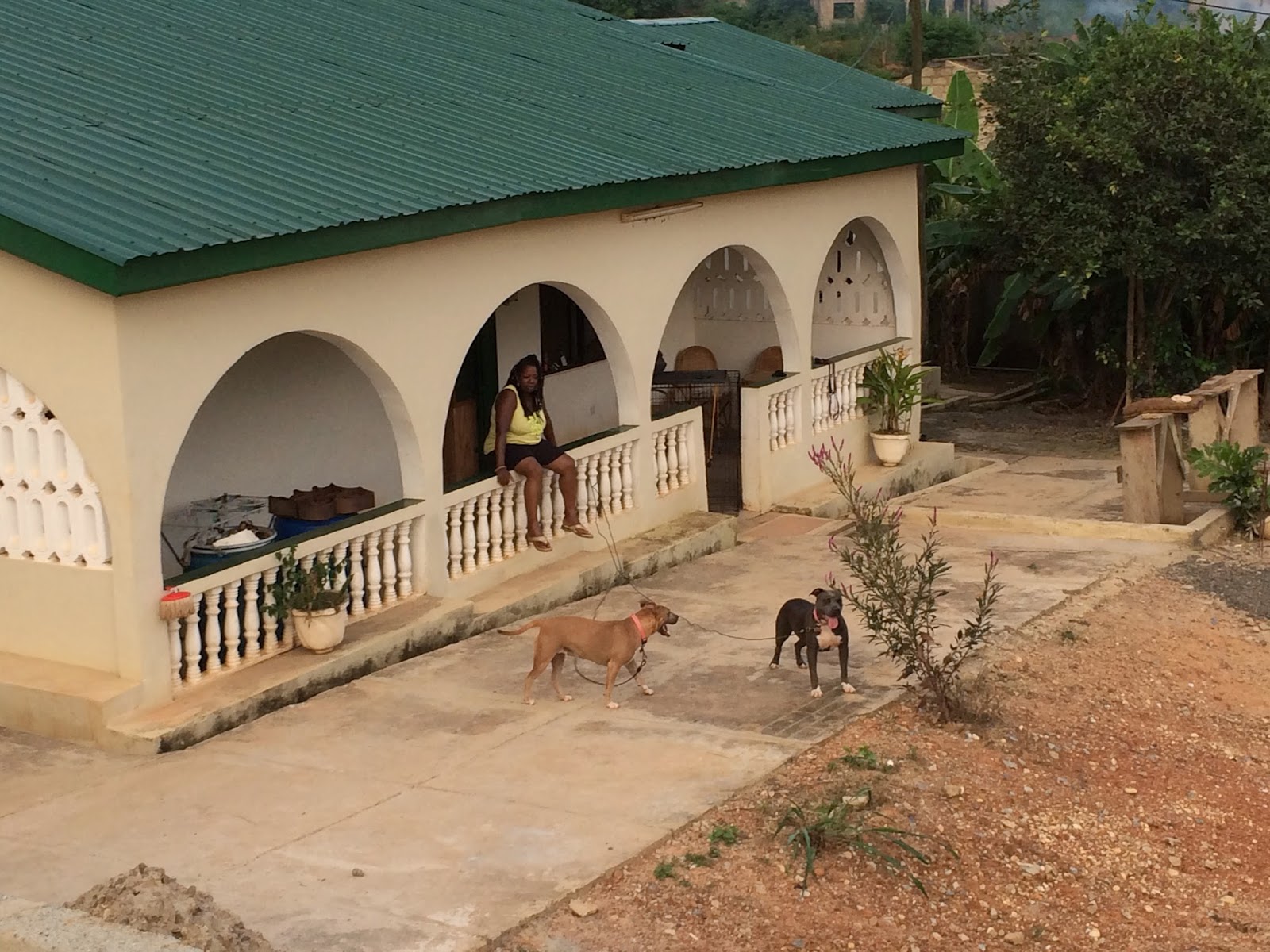 Posted by Bonnee Breese Bentum at 12:52 PM No comments:

Just a collage of photos for your viewing pleasure. This weekend was filled with activities from the graduation party (called the Leavers Celbration). Please post your questions in the comment sections of the blog. I will answer you. 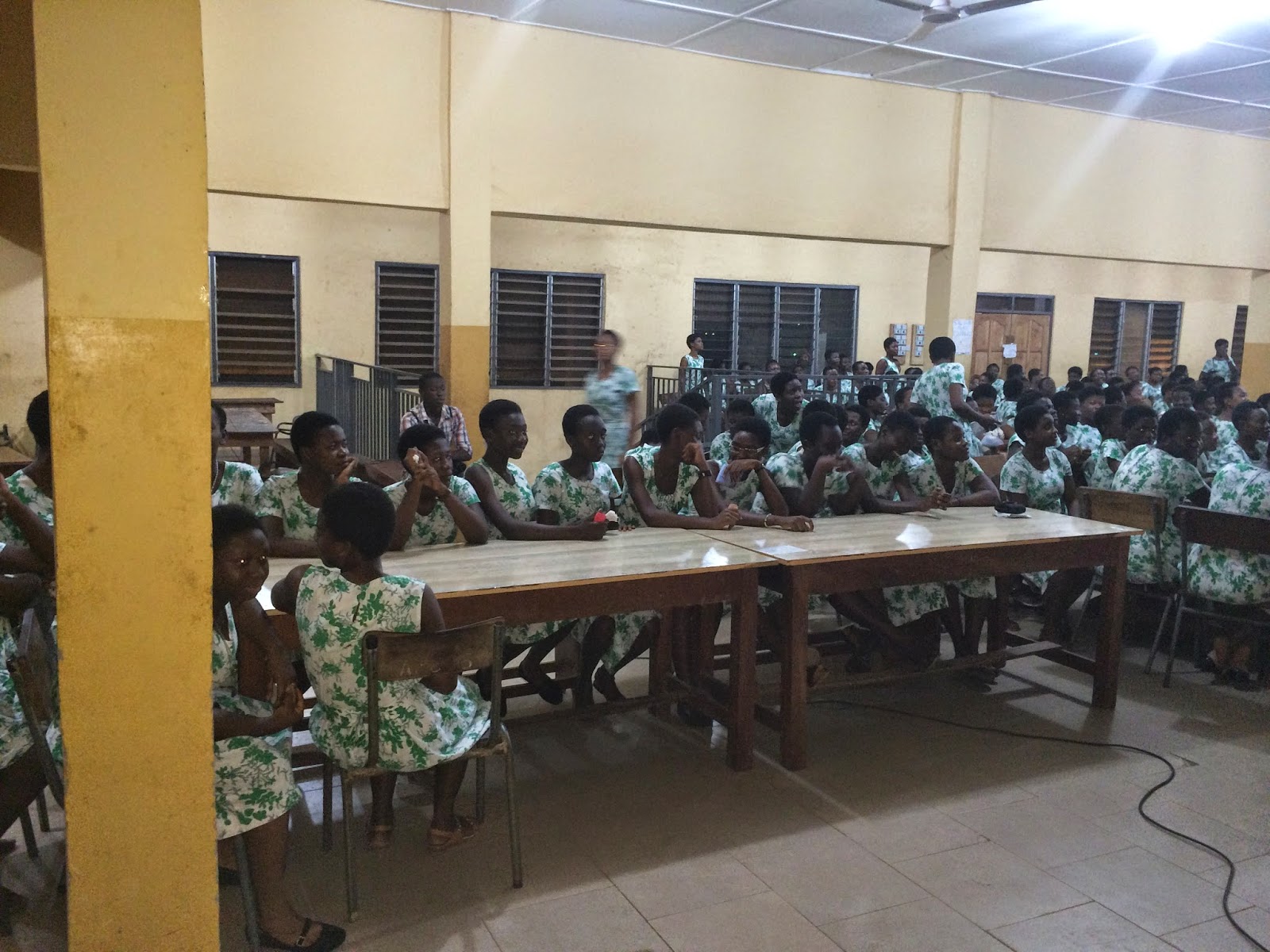 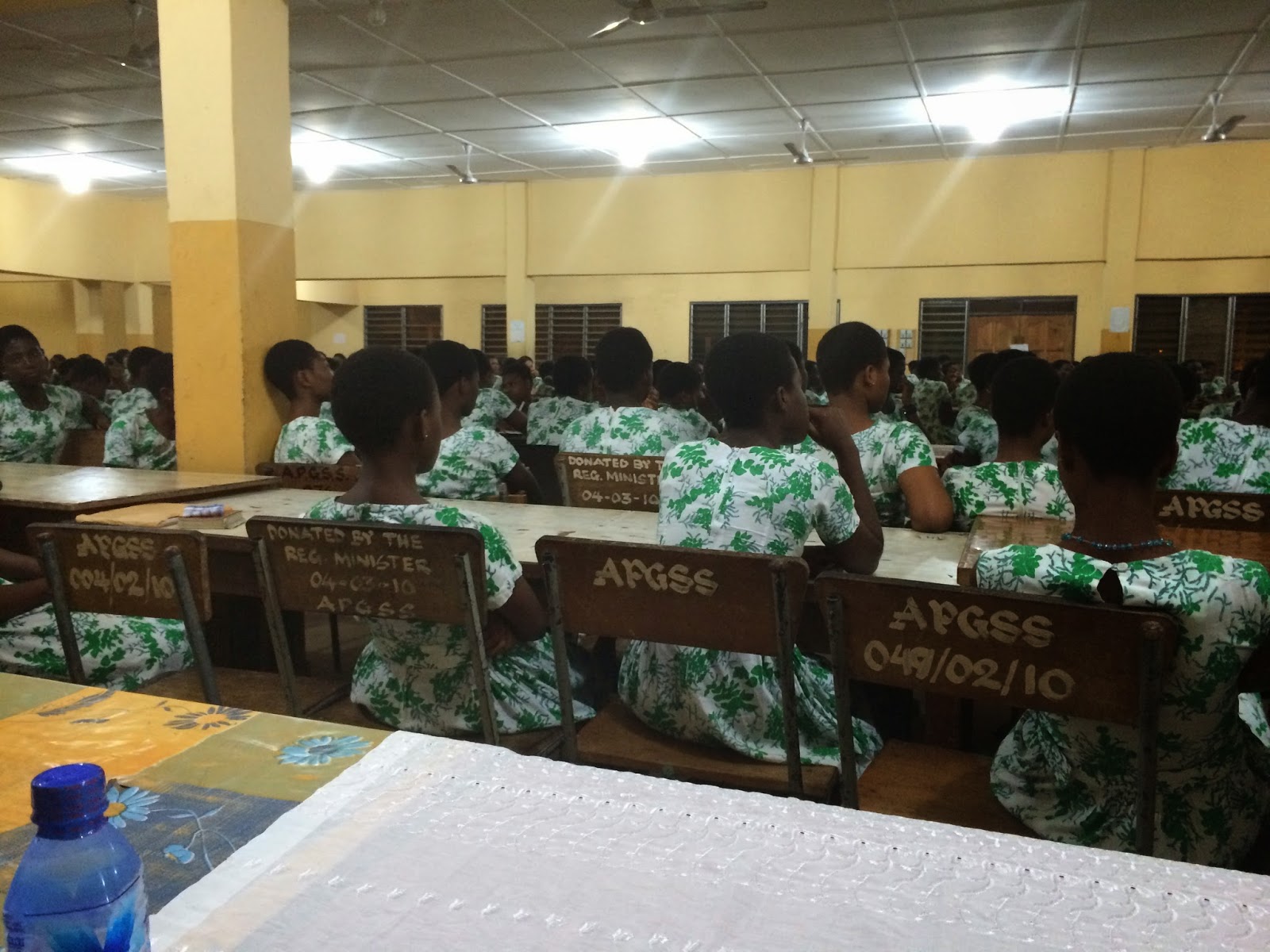 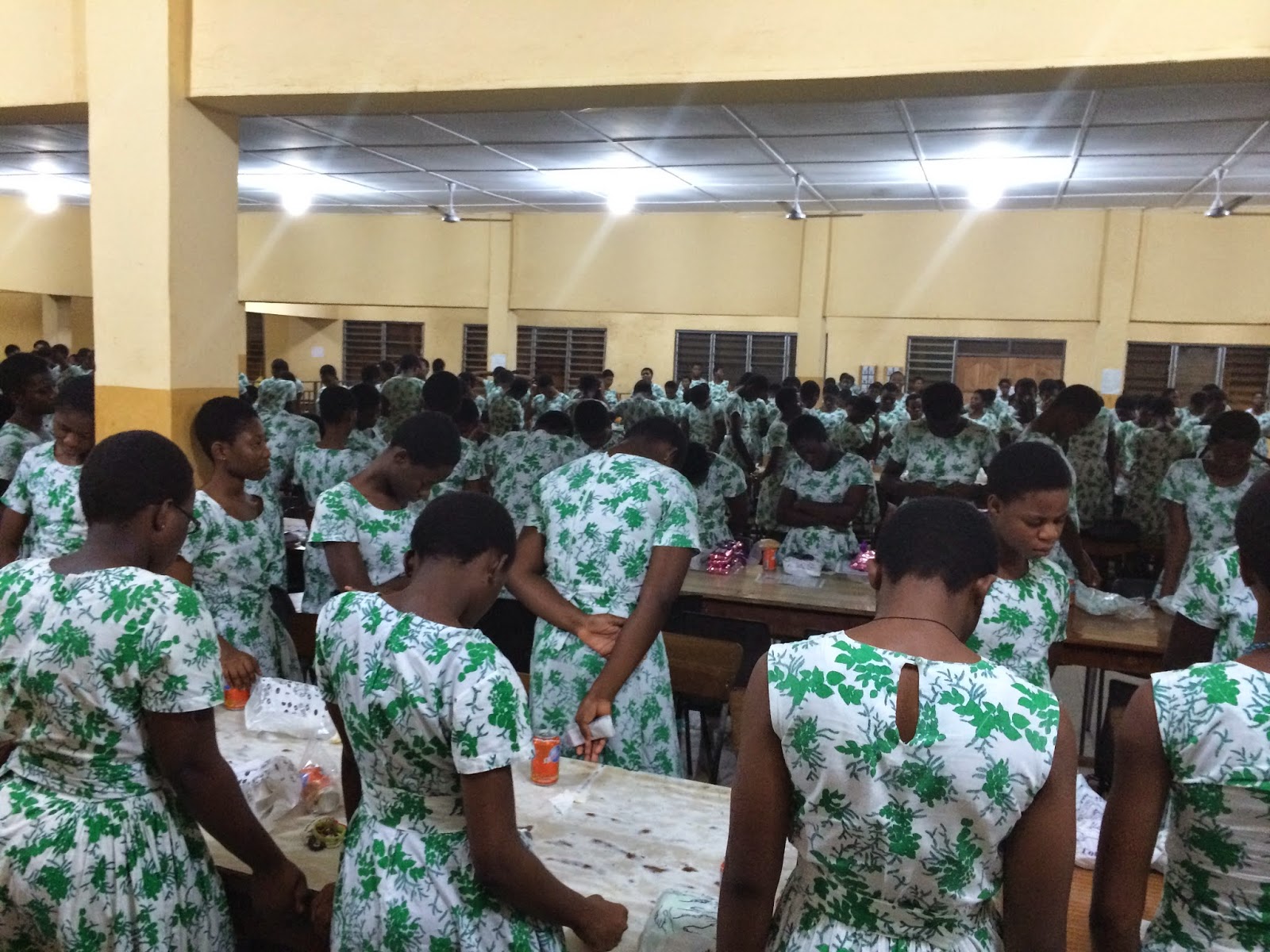 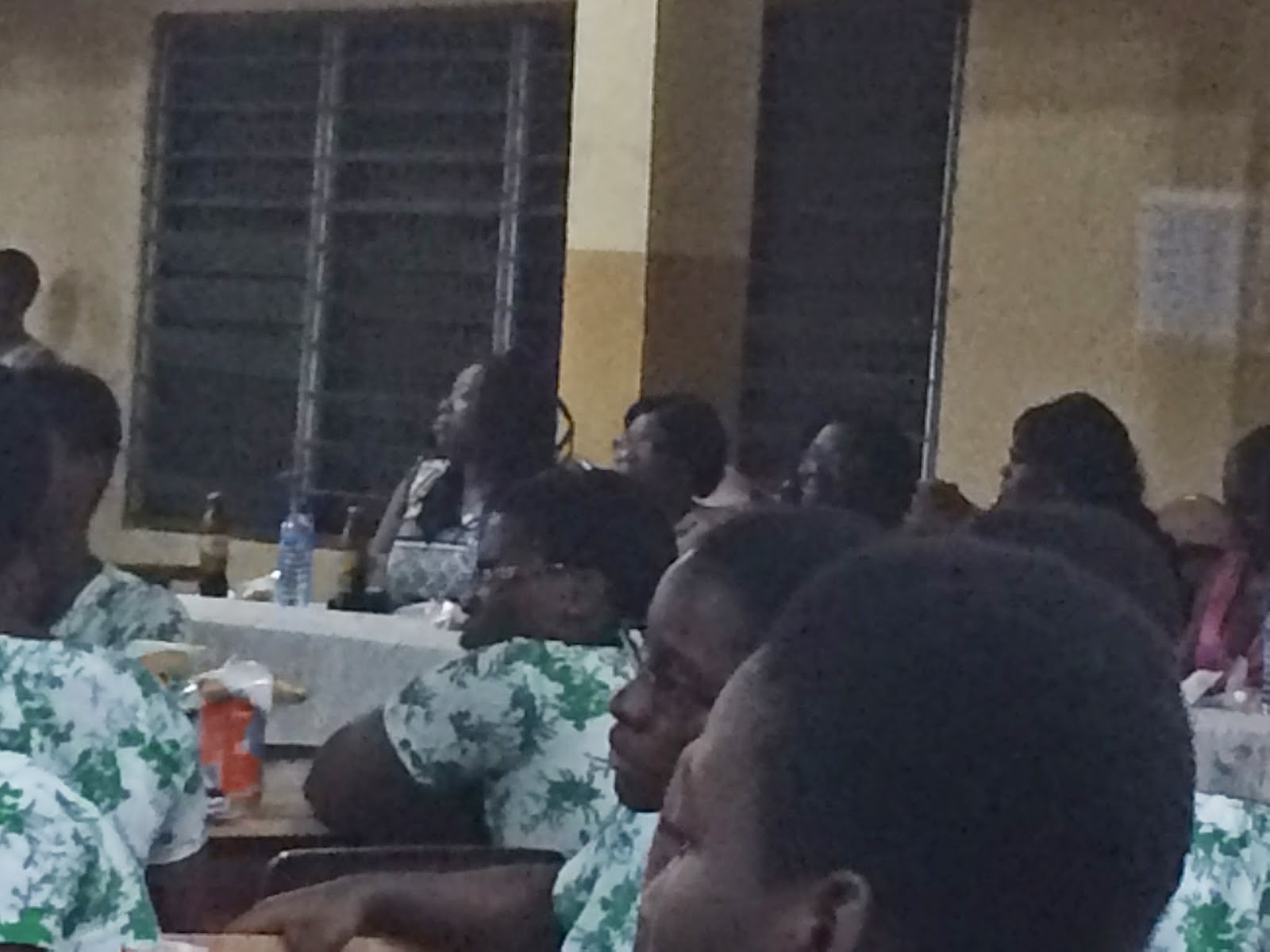 That's me at the end of the head table. 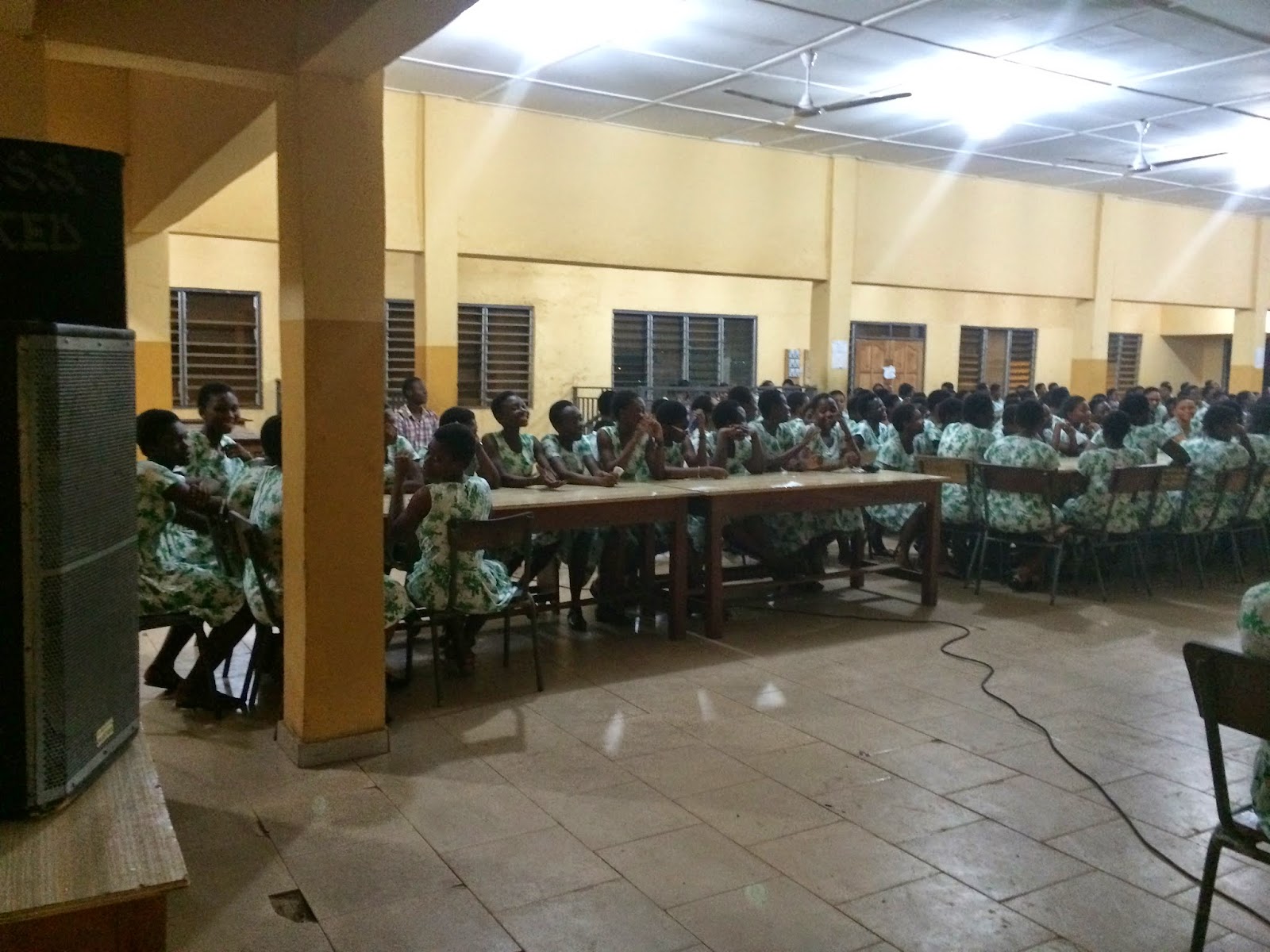 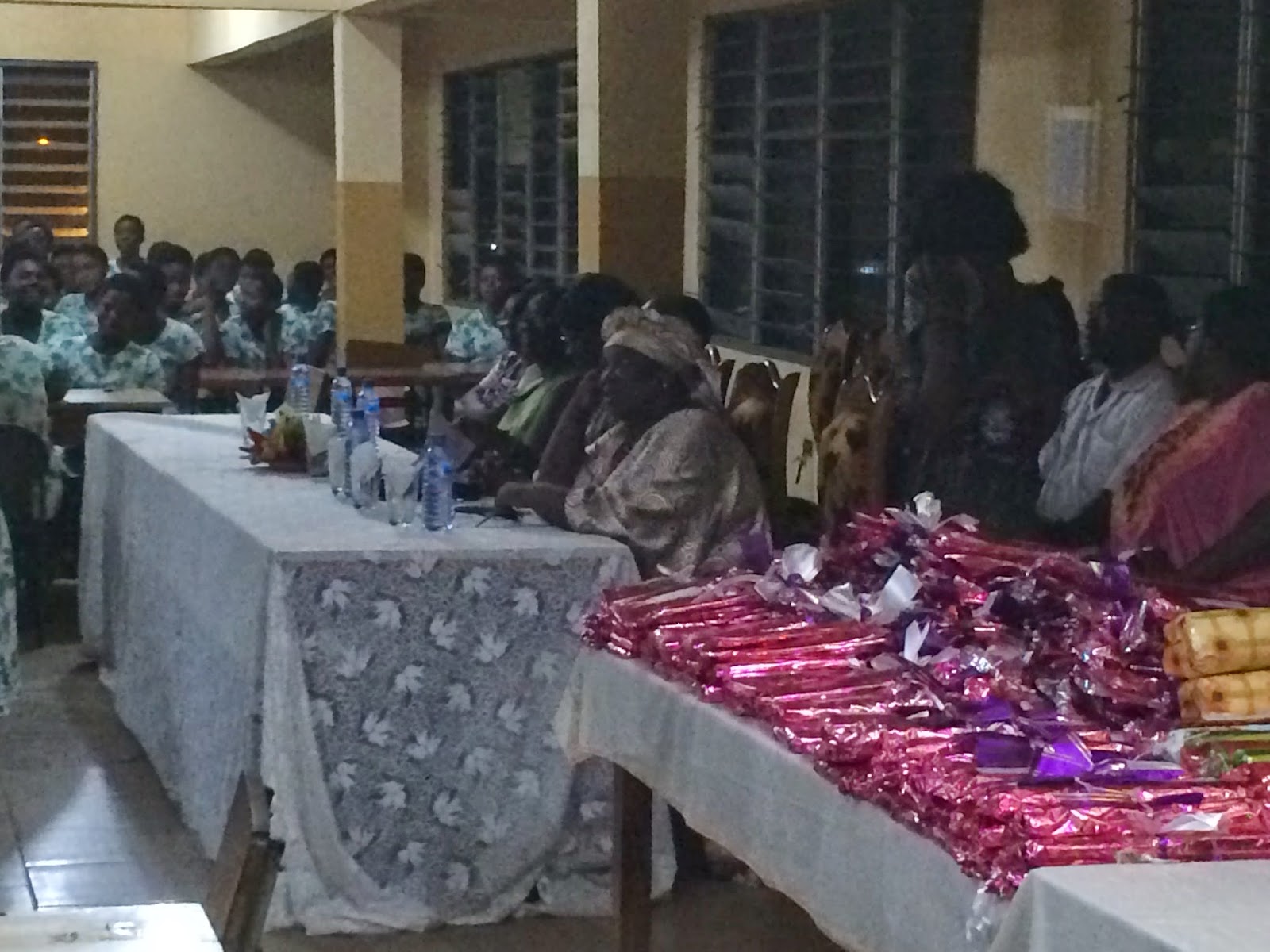 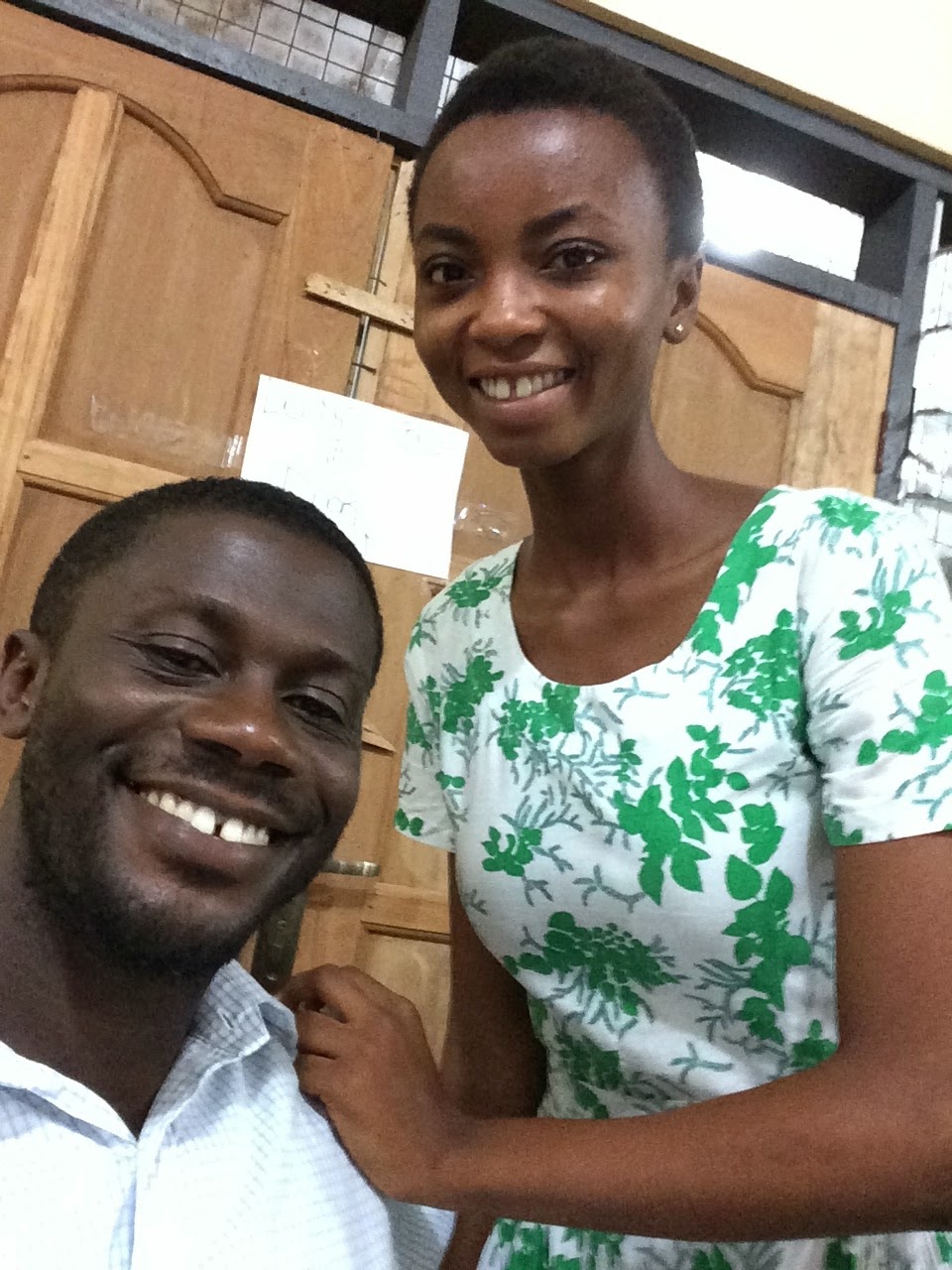 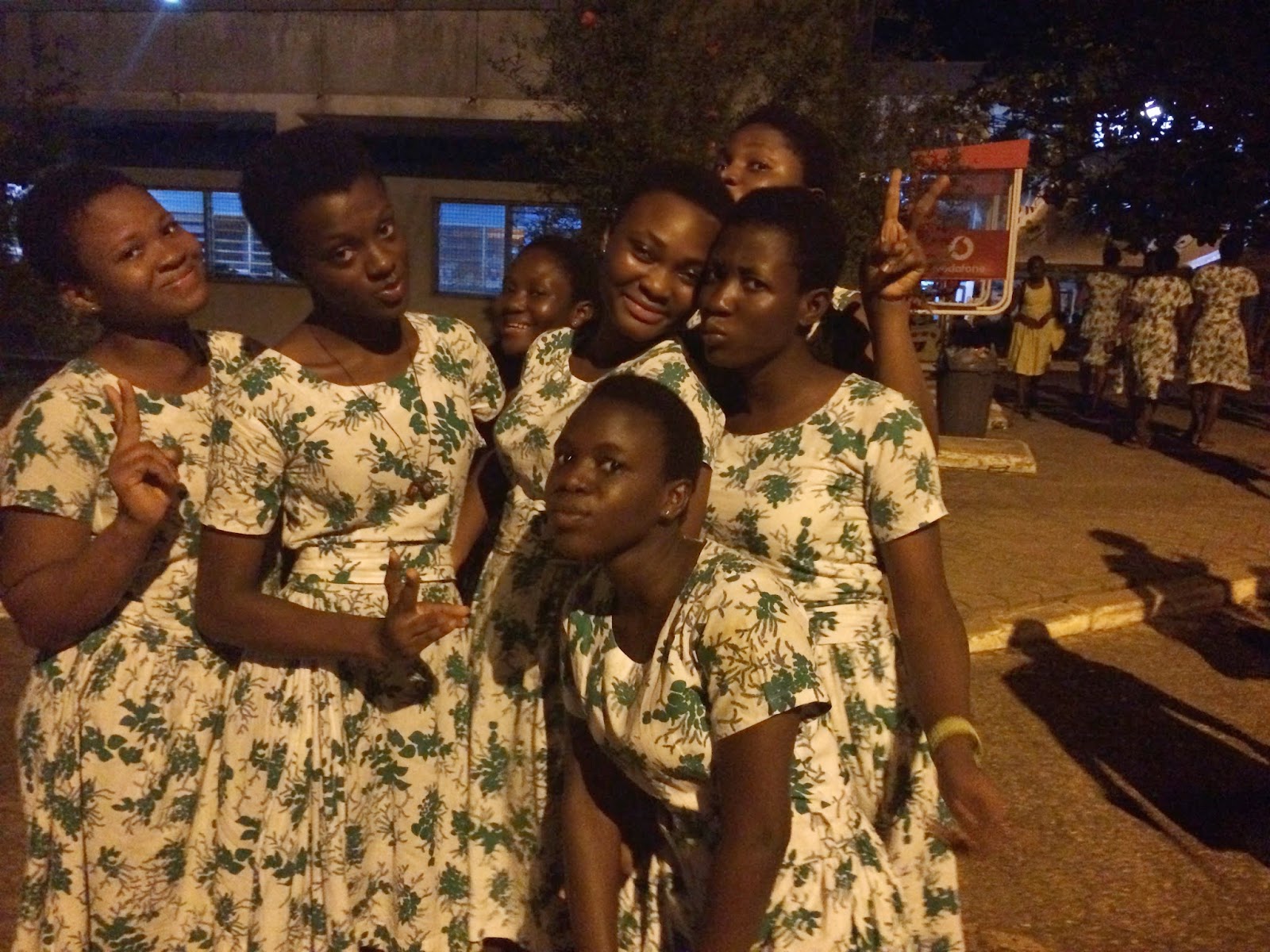 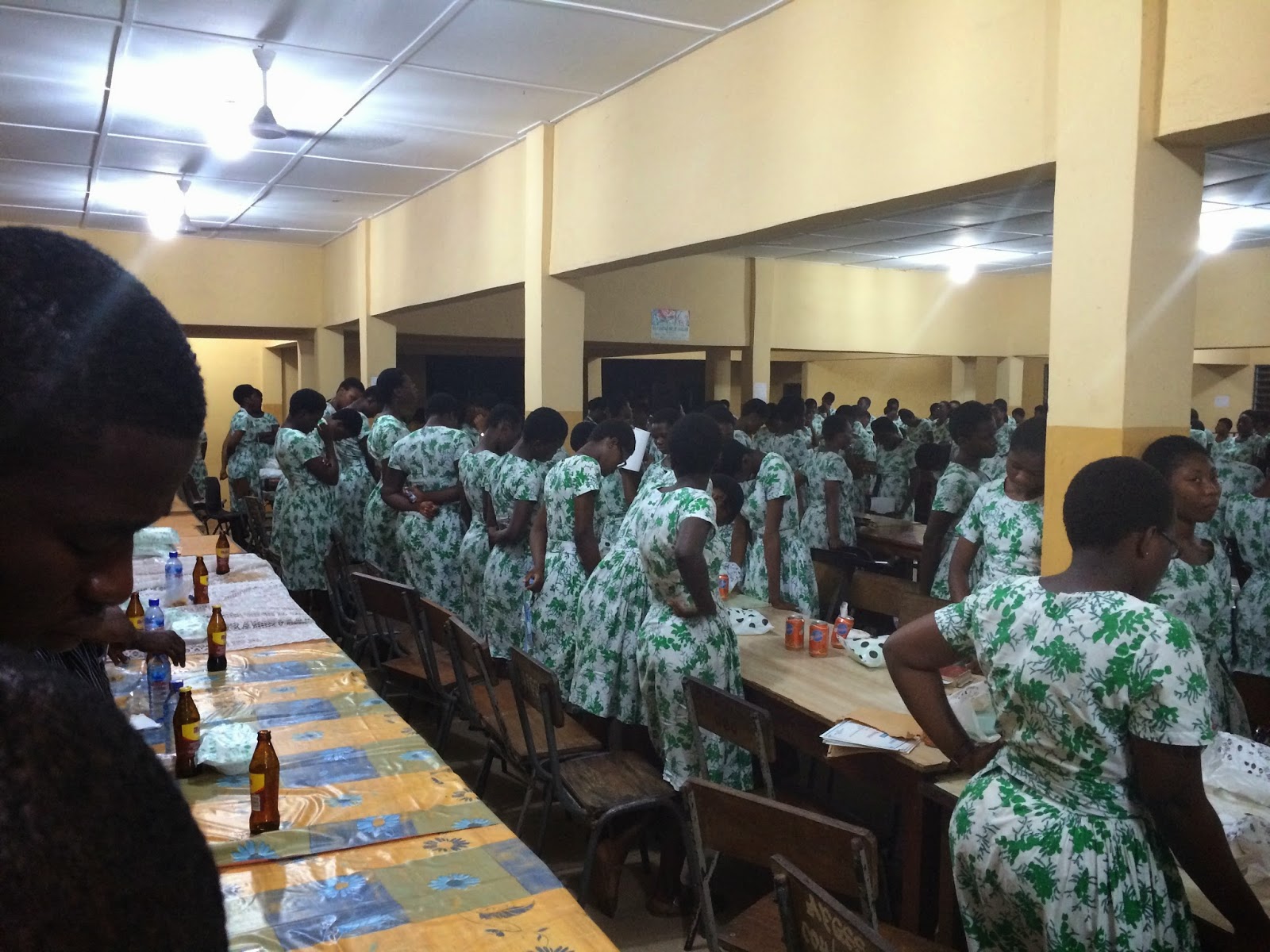 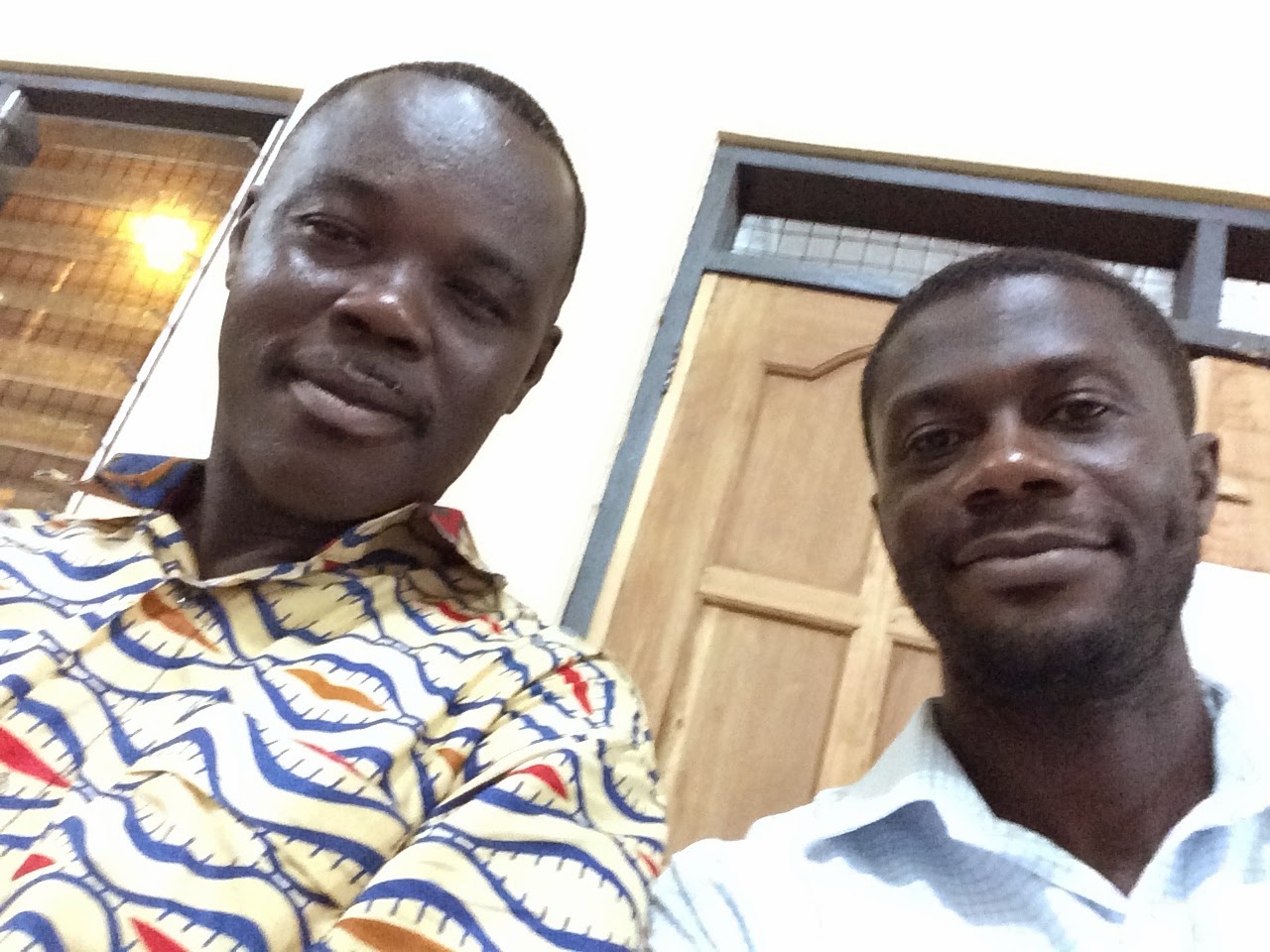 Djokotoe & Bentum were there.
Posted by Bonnee Breese Bentum at 11:35 AM No comments: